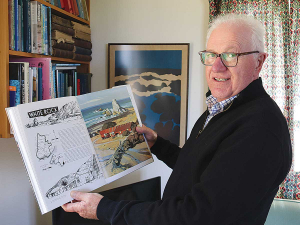 Tim Ritchie with one of the many books written about White Rock. He is keen to pen one himself at some stage.

White Rock Station, way out on the isolated south Wairarapa Coast, is the epitome of rugged beauty that typifies much of NZ’s East Coast.

It’s named after a stunning white rock formation, which dominates the shoreline where the hills rise steeply from the relentlessly pounding surf. The property is about an hour’s drive from Martinborough, along a winding – mainly gravel – road.

Tim Ritchie, who earlier this year retired as the chief executive of the Meat Industry Association, is the great, great grandson of the original owner, Richard Barton who acquired the land in 1843.

Ritchie, along with two other descendants of Barton, have combined to restore the property to its former glory after it was allowed to be run down over the years.

Unlike many iconic stations, White Rock does not have an historic homestead. The reason, Ritchie says, is that none of the owners – including himself – have ever lived permanently on the property. It has been, and still is, run by a manager.

Most of its owners, who’ve had other professions or farming and business interests, were scattered around the world. Today, the farm has a manager’s house, farm buildings and a few modest cottages for owners such as Tim and Deb Ritchie and their family.

“The other reason for not having a homestead there was the isolation and there wasn’t a properly formed road through to the coast until the 1930s – almost a century after White Rock was first farmed,” Ritchie told Rural News.

The history of White Rock is linked to other early settlers in the Wairarapa – such as the Riddifords and Camerons. Ritchie says it original owner Richard Barton was the superintendent of estates of the Duke of Sutherland. Sutherland was a controversial individual, who forcibly removed tenant farmers from his lands, and his infamous actions were known as the ‘Sutherland clearances’.

Barton was asked to come to NZ and take with him some of the people cleared from his lands. He did and when he first arrived in 1840 established himself on a farm in the Hutt Valley, calling it Trentham.

“Then Barton, along with two others – Riddiford and Cameron – walked around the coast from Wellington to Wairarapa and drew lots for the land,” Ritchie explains.

“Richard Barton drew the first lot and took the land he called White Rock. He had three sons and the youngest, William, took over White Rock. He was a lawyer and built a homestead called Fareham House at Featherston which is still there today. He also had other farming interests around Lake Wairarapa.”

In the early days, wool was the main source of income.

However, the property quickly became a large cattle run. Today it is a mix of sheep and cattle.

Ritchie’s involvement with the property began in 1989 when he returned from Europe, where he’d held various senior management roles in the meat industry. He says, at that stage, there were about 30 family shareholders of various generations and the farm had been used as a quasi-bank – it was badly in need of capital to return it to its former glory.

“The place needed a good kick in the pants and, in the end, three of us decided to buy everyone else out and to do it, so we borrowed a lot of money,” he told Rural News.

“So, three of us did a family reorganisation and cut the property in two. An English cousin took the inland part of the farm and me and another cousin, of my mother’s generation, took the coastal half, kept the name White Rock, and that was the settlement.”

He sees the preservation of the station as something that he can do for his children and future generations. He was a very small shareholder in the original property but was prepared to invest to achieve his objective.

“I have had pretty reasonable jobs over the years, so I haven’t tried to realise an income from the property. My other jobs have supported my involvement in development of White Rock,” he told Rural News.

“It is one of the one the earliest stations around the country and I want to preserve it for the families’ sake. My whole objective has been to do whatever is necessary to leave it standing on its own two feet and not be a noose around the neck of future generations.”

Ritchie and wife Deb have now settled in Gladstone and hope to spend more time in their simple cottage at White Rock. The farm cottage, like their new house, is full of memorabilia about White Rock.

He says when they lived in Wellington, the family made frequent visits to the farm and his now grown-up children regard White Rock as their home. Like the previous owners, they have no desire to personally farm the property. One daughter lives in London, another is married to a farmer in Marlborough and their son is winemaker.

“But when the daughter in London comes back, White Rock is the one place she wants to go to because it’s part of her upbringing, it’s the constant in her life,” Ritchie adds.

“My daughter in Blenheim has three little boys and they love it for the riding, fishing, hunting and surfing. It’s a great place for holidays.”

Many books have been written about White Rock and Ritchie wants to add one of his own to this collection. He says it’s not about producing a book for sale, but about recording the history of the farm from a family perspective.  “After all, White Rock is one of the few, early historic stations that still has ownership of the original family,” he says.

A man who dedicated his whole working life to the meat industry died suddenly on December 5.