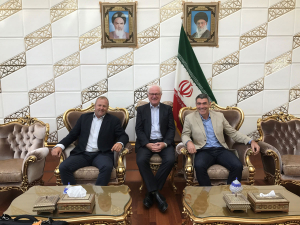 A man who dedicated his whole working life to the meat industry died suddenly on December 5.

Tim Ritchie, 71, made an outstanding contribution in his many roles in the industry over more than 40 years working for Government, the private sector and the Meat Industry Association and its predecessor, the Freezing Companies Association.

After completing a Bachelor of Agricultural Science degree in marketing and economics at Lincoln University, Ritchie embarked on a wide ranging international career in the red meat sector. He started off at Treasury but then moved to Towers International and then to Waitaki International, both in NZ and overseas. Ritchie told Rural News just after his retirement last year that working for Waitaki in London was the highlight of his career

“There as a 30 something year-old my job was to manage the Waitaki operation in the UK and Europe,” he said.

He was involved in handling the big change in the NZ meat industry as it moved from shipping frozen carcasses of meat to butchers in the UK to providing specialist cuts for the big supermarket chains there such as Tesco’s and Waitrose’s. For the young Ritchie it was an exciting time as the business model for NZ meat exports transitioned to a new one.

Still overseas, Ritchie worked in a number of senior roles for the meat industry in London and Brussels and became a regular member of government trade missions designed to open up new markets and consolidate others. He also played a significant role in setting the standards for the halal slaughter of meat – a move which opened up new markets for NZ.

In his last role before in retirement in June 2020, Ritchie headed up the Meat Industry Association and again his intimate knowledge of the sector saw this organisation flourish and build stronger collaborative ties between the processing companies and farmers. He played a huge role in developing new standards for the sector when Covid-19 struck in 2020.

Ritchie’s contribution to the meat industry has been immense. He has been a person of great leadership and influence who has seized opportunities and turned them into success stories. He was in every sense of the word a true gentleman with a love of the land.

He was a part owner of the iconic White Rock Station on the Wairarapa Coast and helped get the station back on its feet. He was deeply passionate about the red meat sector and for me as a journalist who has known Ritchie for most of his working life; he was a delight to deal with – knowledgeable, affable, friendly, diplomatic but strong, unpretentious, kind and a great guy to be around. He will be missed but never forgotten. Rural News extends its condolences to his wife Deb and his extended family.

Tributes to Ritchie have started to flow as news of his sudden death has become known.

Former Agriculture Minister, Nathan Guys says he worked closely with Ritchie over a number of years as Minister for Primary Industries dealing with a variety of issues. He says he vividly recalls containers of meat stuck on the wharves in China due to a certification issue and noted that the  meat industry were fired up about the delay and Ritchie had to front NZ media.

“He was calm and constructive and could have easily inflamed the situation and made the matter a lot worse with Chinese officials. Tim was like a diplomatic statesman and helped make my job a hell of a lot easier to help clear the backlog.

“We travelled together to Iran to reopen up meat exports. Trade missions can be challenging with different cultures and languages to navigate. Tim was once again a great ambassador for our country and the meat industry. He helped get the deal over the line,” he says.

Guy says Ritchie always appeared comfortable in many different situations including lobbying politicians, negotiating with senior officials and helping bring meat companies together to speak with a common voice.

“I express my sympathy to Deb, family and friends at this sad time. He made a massive contribution to the meat industry, our country and will be missed.”