Colorado concept huge at Fieldays and beyond 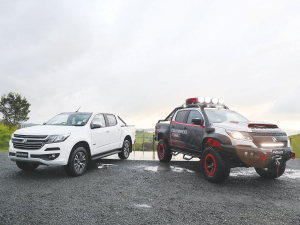 With saloon cars fading on buyers’ radar, Holden is confirming its focus on the ute and SUV market.

The company chose the National Fieldays to reveal its home-grown concept -- the mighty Colorado ROX.

“We know many of our customers have grand visions of what they’d like to do to personalise their own vehicles after driving them out of the dealership. So we wanted to showcase how far you could take the extremely capable Colorado” says HNZ managing director Marc Ebolo.

“Once the ball was rolling our marketing team, with partners Retro Vehicle Enhancement (RVE), spent a lot of time and effort bringing this concept to life.”

The ROX runs on 35-inch Blackbear mud terrain tyres and has custom made flares to house the huge wheels, a six-inch suspension and body lift kit. ‘Rock Sliders’ with removable drop steps make getting in and out almost as easy as on a standard Colorado.

The vehicle has a carbon fibre, high rise bonnet, hand crafted bespoke front and rear steel bumpers and a rear deck cargo system and 500mm tray extender. It also has an extended wrapping roof bar with retractable lights and a roof basket.

Inside the vehicle has been up-spec’d with front and rear RVE sports seats with hand made leather upholstery.

The Colorado ROX will demonstrate the model’s 3.5 tonne towing capability, hauling a laden event trailer as it tours the country on a nationwide dealership tour.

It will be displayed at big shows such as Fieldays.

To bring the project to life, Holden partnered with Retro Vehicle Enhancement (RVE), an Auckland business specialising in aftermarket vehicles.

RVE sources parts from Poland, America and Taiwan. Many were made from scratch, requiring extensive one-off CAD engineering.