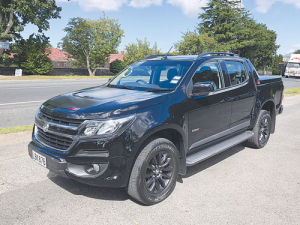 Holden is still spending up large on a marketing campaign to remind you of one thing – they’re still here.

It’s in response to the widely telegraphed end to the Australian developed and built Commodore, a move some assumed meant the end of the iconic brand.

However, as Holden’s managing director Kristian Aquilina says: “nothing could be further from the truth”.

Holden has just launched the all-new Commodore and Equinox SUV and the American-sourced Acadia SUV is waiting in the wings.

And in the crucial ute category, Holden has a strong contender – the vastly improved Colorado. Utes dominate the new car sales charts these days, with the Toyota Corolla the only passenger car making the top five this year.

The Colorado sits in a respectable fourth place overall, and the Ford Ranger and Toyota Hilux hold the two top spots.

We’ve reviewed the Colorado in Rural News before.

A refresher drive reminded us why we liked it so much and why it is holding its own in the sales charts.

It’s a well-sorted truck now, following extensive refinements to ride, noise and vibration levels and equipment and standard of finish.

The engine is still pretty gruff compared to some of the competition but it more than compensates with sheer grunt. The ride and handling is excellent for a ute. And for those who insist on judging utes on how ‘car-like’ they are, it’ll do fine as an SUV-substitute as well, especially in the full-fruit Z71 we drove, which adds a level of luxury not needed in a truck, but nice to have all the same.

For traditional large-car buyers not ready to migrate to a ute or SUV, the new Commodore in sedan or wagon form should be considered, given it has been extensively tuned in Australia to suit the rough Aussie and Kiwi roads. Rural News will review the Calais-V in an upcoming issue.

Meanwhile, another development Holden plan to roll out over the next two years is Onstar technology that will connect every new Holden to the internet (benefits include emergency, security, navigation, connections and vehicle management services).