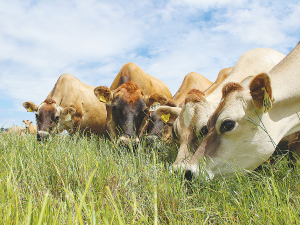 About 80% of NZ’s total N2O emissions come from urine patches on paddocks.

Carbon dioxide and nitrous oxide are considered long lived gases because significant amounts remain in the atmosphere for a long time, even centuries. Methane is a relatively short lived gas, breaking down within a few decades.

Similarly, one tonne of biological methane traps about 33 times more heat than a tonne of carbon dioxide over 100 years.

About 80% of our country’s total N2O emissions come from urine patches on paddocks. A recent report from the Government indicated that the N2O emissions have increased by almost half since 1990.

The transformation of N-containing compounds in soils to produce N2O emissions includes nitrification of ammonium (NH+4) – an aerobic biochemical process. Nitrification yields nitrite (NO-2), but when limited by oxygen supply, nitrite can be an electron acceptor and reduced to nitrous oxide. In other words, the wetter they become in soils, the greater will be the rates of nitrification and N2O production. When soils become anoxic, nitrate can be sequentially reduced to N2O and inert nitrogen. This is called de-nitrification.

Methane emissions are higher on farms with higher stocking rates and higher dry matter consumption. Some of the options to reduce methane are lowering replacement rates, reducing the dry matter feed per cow and lowering stocking rates.

Other good practices include optimum cultivation, avoiding over grazing and heavy grazing under wet weather leading to compaction, avoiding under or over-fertilisation, practicing appropriate use of pesticides and other agrochemicals, managing pasture to maintain complete soil cover and careful applying farm dairy effluent to avoid saturation and to optimise organic matter.

The options for reducing N2O could be reducing nitrogen inputs through judicious use of fertilisers, using low nitrogen feeds and improving pasture quality.

There is every benefit in protecting the sensitive areas on farms. Wetlands give a wide range of ecosystem benefits such as improving water quality, flood regulation, coastal protection and providing recreational opportunities and fish habitat.

Climate change affects all of us, including the primary sector. Reducing greenhouse gas emissions is a priority.