The mood at Mystery Creek 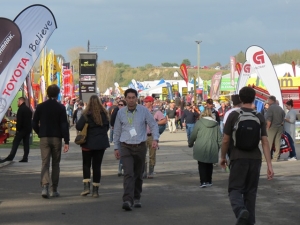 Arguably the mood at the National Fieldays is a tangible barometer for farmer confidence. When the dairy pay-out was high, farmers had cheque books at the ready, but this year with the pay-out down, there was much speculation as to just how farmers would react.

As it transpires, the mood this year is one of the most unusual in the history of the event according to those people who been coming here for 30 plus years. Firstly there is no out-pouring of anger at the low milk price according to those on the Fonterra stand – rather an acceptance of what's happening and a resilience to deal with this.

Exhibitors speak of farmers talking about plans they have for future – be it in terms of buying equipment or undertaking new projects on their farms and getting advice and shopping around. Some exhibitors say they have made good sales. Certainly the attendance is on a par with last year which is encouraging.

The chief executive Peter Nation talks of Fieldays offering a welcome break from the farm for farmers to catch up with friends and suppliers and to commune in a positive environment, albeit for just a day or two. There have been lots of seminars by exhibitors and these have proved popular. You could describe the mood as walking positive.

On the slightly wacky side, AgResearch were offering free 'meat chocolates' which while their taste is acquired, they are, at worst, a conversation piece at any party. But are they an entrée or a dessert? There was a well known scientist on the hunt for a jet ski during a break from his stand.

But perhaps the surprise of the day/event was the fleeting appearance of Paula Bennett at the Fonterra stand. Why was the Minister for Social Housing visiting Fonterra I asked? She quickly showed up my journalistic ignorance by pointing out she was there in her capacity as the Minister for Climate Change. So that's about predicting the climate for dairy in the future? In fact it was Bennett's first ever Fielday and she was happy to wax lyrical about the event.

Whatever, it's another great Fieldays which oozes positivity and showcases the breadth and strength of NZ's primary sector.