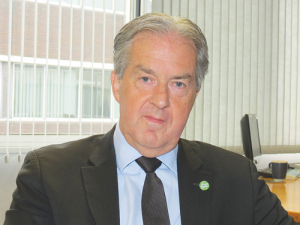 Origin Green, a scheme that verifies the sustainability of Ireland’s food and drink production, now has 100% of the country’s dairy farmers and 90% of beef farmers signed up to its extensive auditing.

Ireland is the first country with such a scheme, now envied by many countries including New Zealand.

Aidan Cotter is a quietly spoken man from Cork in the south-east of Ireland. He’s been chief executive of Bord Bia, the Irish Food Board, since 2004 and the visionary and implementer of Origin Green.

Ireland and New Zealand are similar in many ways: the Irish countryside is often referred to as having 40 shades of green and it’s arguable NZ could claim this too.

NZ has used the ‘clean green’ phrase frequently, but the Irish have stolen a march on us by going one stage further – using an extensive, evidence-based science programme. Origin Green has been lauded worldwide and a steady stream of visitors from countries with a strong agricultural base -- including New Zealanders -- are knocking on Cotter’s door to find out more about the scheme.

But Bord Bia isn’t just waiting for visitors. It’s got offices in Moscow, New York, Shanghai, Madrid, Milan and Dubai to, name a few, which it uses to get its messages across.

And Cotter says he has talked to the Food and Agriculture Organisation (FAO), World Wildlife Fund, World Bank and many international commercial organisations, such as Coca Cola, since the scheme was launched four and half years ago.

Origin Green has used EU regulations on sustainability as its base platform, but it as gone much further, Cotter says.

“We are carbon footprinting every farm in Ireland every 18 months. No other country is doing that,” he told Rural News.

“We have a whole audit system above the EU legislative requirement. Origin Green is voluntary and the audit encompasses food safety, traceability, animal health and welfare, a range of environmental considerations and we have added on biodiversity, water conservation and a lot of other areas.”

Cotter says Ireland as a nation understands that it lives or dies by global markets, and that to be successful it needs a point of difference – which Origen Green gives.

He says while no farmer likes being audited, they recognise it is part of the price of gaining and retaining world market share.

He points to the importance of Ireland’s agricultural exports -- 90% of its beef, in particular, is exported.

Next year, Cotter will step down from his role as chief executive of Bord Bia, the most exciting and rewarding thing he’s ever been a part of, leaving a huge legacy. He has claimed the high ground on sustainable food production for Ireland and put in place a system other countries, such as NZ, can only wonder about not having achieved.