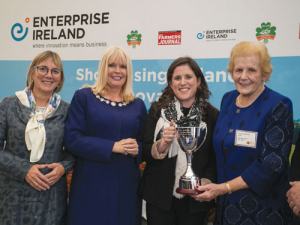 Irish women have played a key role in the success of an Irish agritech company now 70 years in the business.

Four years ago, aged just 31, Clodagh Cavanagh took over from her father in running Abbey Machinery and kept on with its repositioning and growth.

From an early age she was destined to become part of the company which makes slurry tankers, mixers, spreaders and sprayers, selling them worldwide, including New Zealand.

Cavanagh graduated in business studies and qualified as an accountant. She is seen as one of the young, rising entrepreneurs in Ireland. But the company itself had humble beginnings in the town of Nenagh, County Tipperary, south-east Ireland.

“My family were blacksmiths in the 1800s and would have been famous for the Cavanagh plough back in the 1900s. My grandfather was a trained blacksmith who also worked as a foreman for the aluminium factory, which was in Nenagh at the time,” she told Rural News. “He went to the US in the 1940s and picked up welding techniques from the shipyards in San Francisco. Rumour has it he hitched a lift home on a navy ship.”

Cavanagh’s grandfather Joe and his wife Mary set up Abbey Machinery in 1947 and it has grown from a small family factory to a large high-tech business on a new site.

“My grandfather was the engineer and innovator and my grandmother the businesswoman. She was a strong woman and in May 2016 at the amazing age of 100 officially opened our new factory. She has since passed away, but she was a tough lady and a great role model for me and other women.”

The new 13ha site includes a 10,000m2 factory with a big R&D centre. The site is large to allow for testing new products.

“Our driver is innovation and new products and in the space of two years we have created four new products,” she says.

An unusual aspect of Abbey’s R&D is employing part-time farmers to work with engineers and others who work full-time in that area. Cavanagh says this means farmers who use the products are involved at an early stage and are able to provide practical feedback on product design. The company also emphasises getting feedback from customers to build up knowledge.

Cavanagh, now aged 35, says her rise to managing director has coincided with an upsurge of interest in science and agriculture in Ireland and more emphasis on education. Young people see the value of science in raising crop yields and productivity and are keen to be a part of this renaissance.

Cavanagh believes it also helps that, for the most part, young people in Ireland are close to the land and farming is part of the culture.

Last year Cavanagh won the inaugural Anna May McHugh Female Leadership in Agriculture Perpetual Trophy. Anna May McHugh established the National Ploughing Championships in Ireland and is a respected and revered businesswoman in Ireland.

“It was a great privilege and especially to get the award form Anna May. She is a gem of a role model for any woman. In Ireland the times are changing and there is more encouragement for women,” she says. “There are more women in engineering and we are encouraged into engineering by schools and Enterprise Ireland. Then you look at my grandmother – she was a great woman in business for years, the same as Anna May.”

Though Cavanagh has two brothers involved in the business, she had the support of her father to take over his role as managing director. She is passionate about the business and says its strength lies in its strong team and culture.

From humble beginnings as a family business making ploughs for local farmers, Abbey Machinery now employs 90 staff and has established itself as a successful agri-tech company in Ireland and on the international stage.

The expansion of the dairy industry in Ireland is starting to affect the environmental health of the country’s lakes, rivers and estuaries.