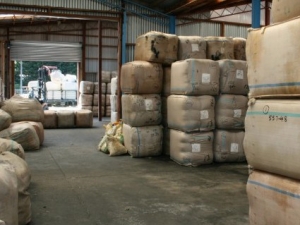 The weighted indicator for the main trading currencies was down 2.04% compared to the last sale on 9th July.

Of the 7,900 bales on offer from the South Island, 88% sold with types suitable for in the grease shipments coming under strong competition.

Compared to the last time it was offered, at the North Island sale on 9th July, Fine Crossbred Fleece remained firm with longer shear types up to 3% dearer.

Long Oddments were nominally 2% dearer with short oddments ranging from 1% cheaper to 2% dearer.

There was widespread interest for the wide cross section of types available, with Chinese shippers the most active, supported by Australasia, Western Europe, Middle East and India.

The next sale on 23rd July comprises approximately 6,000 bales from the North Island, down 32% on anticipated roster due to poor weather delaying shearing.