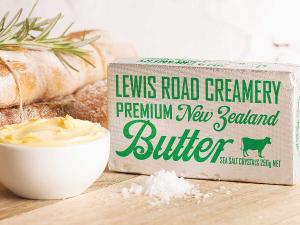 Butter producers who can provide authentic and traceable proof of very high grass and very low carbon will put themselves in pole position.

There's no doubt butter is back. Since 2014, global demand for butter has increased at around 7% per annum. Prices have hit multiple new highs and dairy farmers in key markets are turning to Jersey cows for their higher fat milk. It marks the reversal of a trend long driven by poor health advice and cheap convenience.

Butter’s boom to bust to boom

Up until the 1930s, butter enjoyed a stellar reputation as a nutritious staple in Western diets. Dairy farming and butter production were generally family-run artisanal practices using grass-fed milk.

Margarine was hardly in the picture. Made from beef tallow and other odds and ends, consumption of this greasy spread was also limited in the US by taxes associated with the federal margarine act.

It took a global war to knock butter from its perch.

Exporting butter from the US to Europe during war time became too costly, inefficient, and risky. So, food scientists sought to make substitutes. Margarine was reformulated with vegetable fats instead of beef tallow. The improved flavor and simplified supply chain made it a more convenient option to feed soldiers overseas. Soon after World War Two, the US federal margarine act was repealed, reducing prices, and so began the shift from butter to margarine. To drive down the cost of production, dairy cows in the US were shifted to a cheaper grain-fed diet and the golden hue of grass-fed butter faded along with demand.

In the 1950s, an anti-fat trend delivered a second blow to butter. In 1958, prominent scientist Ancel Keys made the front page of Time magazine claiming saturated fats clogged arteries and caused heart disease. Few disputed his research and for the next five decades consumers turned away from natural fats and instead consumed vast amounts of artificially hydrogenated trans-fats in margarine.

The early 90s took the anti-fat movement further, with the claim that “fat makes you fat” regardless of its composition. The low fat-diet was born, and consumers turned to fat-free sugars and carbs which started the slow demise of margarine.

In the early 2000s there was a significant shift back to natural foods, underscored by the discovery that Ancel Keys had cherry picked his data to fit his conclusions back in 1958. Time magazine proclaimed an end to the war on fat in 2014 by putting butter on its cover.  A systematic meta-analysis of literature has added to a growing body of research that low-fat diets are misguided. The study shows that butter might even protect against type 2 diabetes.

The trend back to butter has continued, with steady growth in demand starting to hit a steeper curve, in part thanks to locked-down Covid consumers spending more time in the kitchen.

Pre-pandemic, trends such as the keto diet, the carnivore diet, and natural food diets also supported demand. From grain-fed to organic butters, consumers are now faced with a huge amount of choice, and they are increasingly well informed about which butter is better.

As any baker knows, the key indicator of quality is colour. This instinctive preference for a golden hue is increasingly supported by studies. Cows eating mainly grass produce a deep yellow butter that is rich in beta-carotenes. These are converted by the human body into the important nutrient Vitamin A.  Grass-fed butter is also higher in vitamin K2 and contains 500% more CLAs  (conjugated linoleic acid) than grain fed butter. Numerous studies have indicated that CLAs can help prevent certain chronic diseases, such as type 2 diabetes, heart disease, and even certain cancers.

Moreover, fat composition within grass-fed butter shows higher levels of good omega 3 fats than a grain-fed product. For cows on a very high grass-fed diet, such as those on a Southern Pastures farm eating a consistent 96% grass diet, the ratio of omega 3 fats to omega 6 is a world-beating 1:1. Sold under the Lewis Road Brand, the butter now commands the highest price of any export butter currently sold by Whole Foods in the United States.

Consumers are now starting to want more information about the carbon footprint of their food. New Zealand is well positioned to answer that, with new studies showing we have the most efficient on farm dairy emissions of all major milk producing countries. Butter producers who can provide authentic and traceable proof of very high grass and very low carbon will put themselves in pole position.

Specialty butter made from New Zealand grass-fed milk is now available locally after sales success in the US over the past two years.

Fonterra has launched its ‘carbonzero’ certified NZMP organic butter to the North American market, the first such ingredient product in its portfolio.