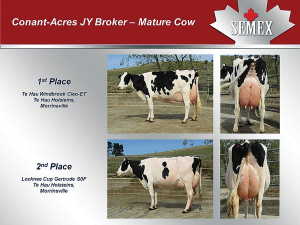 The annual competition is aimed at attracting entries from members and non-members alike to promote the Holstein Friesian breed.

Individual cows are judged on type at their home property in natural conditions without being fitted or halter led.

Six in-milk age groups classes are open to all Holstein Friesian cattle. Breeders enter their cattle for regional judging and the top two animals in each class in each region then move on to the national competition to compete for the Champion and Reserve Champion titles for each class.

The top animals are judged again by a national judge – in 2022, Graham Stewart of Rangiora – with the results announced at the Holstein Friesian New Zealand Annual Conference.

Stewart says the HFNZ-Semex On-Farm competition was the most prestigious competition the Association was involved with, and the sheer number of entries this year, which far surpassed previous years, was indicative of how worthwhile it was.

For Matamata dairy farmers Michelle and Bill Burgess, one cattle breed is ticking all the boxed for their milkers this mating season.

A winning formula for good cows