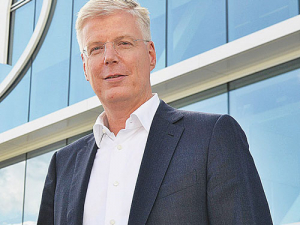 After selling its forage harvesting equipment business to AGCO Corporation last year, Lely is now focused on automation inside the dairy shed.

At Future Farm Days coinciding last month with the company’s 70th birthday celebration at its headquarters in Maassluis, The Netherlands, Lely launched the latest version of its robotic milker- the A5.

Chief executive Alexander van der Lely told visitors, including journalists from many countries, that farmers are part of the company’s DNA. “To this day we remain an innovative family-run company with farming running through our veins,” he says.

“I’m proud that we are working every day on the fields my family once farmed in.

“Our history tells us much about who we are and what we stand for; we call ourselves farming innovators for a reason.”

Lely was founded 70 years ago by van der Lely’s father and uncle, both farmers, at Maassluis; both men aimed to change agricultural traditions and make farmers’ lives better. Van der Lely noted that innovation was at the forefront of the founders’ minds.

The Lely journey started in 1948 with the invention of the finger wheel rake, pulled by horses and tested onfarm.

In 1965, the Lely Lotus hook tine made its debut, a uniquely designed tedder tine which turns crop faster and evenly; it was produced by Lely until recently.

However, the development of the Lelyterra power harrow in 1968 marked the real breakthrough and internationalisation of Lely.

Van der Lely says sales grew and the company expanded by opening factories in UK, France and the US; sales offices were set up in Australia, Canada, Brazil, Italy, South Africa and Germany.

Van der Lely says his father’s goal was always to invent a new plough or tractor.

“Many don’t know that in the 1970s we introduced our own tractor, with fully hydraulic drive – way ahead of its time. It was known as Lely Hydro but it never turned into a commercial success,” he says.

A string of inventions followed in the 1970s and 1980s: the Hibiscus rake and the Splendimo disc mower. The company grew, buying German baler and wrapper manufacturer Welger.

In 1992, Lely earned world renown in launching its robotic milking machine Astronaut A1.

This invention “is still called after all those years ‘the invention of the 20th century’,” says van der Lely.

Van der Lely, who took over as chief executive in 2004 from brother Olaf, says robotics became an increasing focus for the company.

“Our increasing focus on robotics allowed us to further reduce repetitive work by farmers and created more freedom for the cow.”

Family-run Stackhouse Contracting relies on Massey Ferguson and Lely to get jobs done.

Lely Astronaut A5 lands at Fieldays

Lely's new milestone in automated milking, the Lely  Astronaut A5, will debut at the National Fieldays.