Faster broadband a boon to dairying 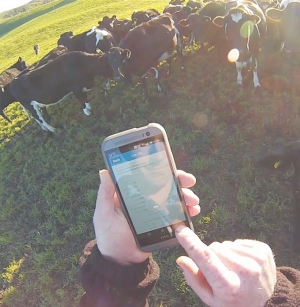 TELECOMMS COMPANY Spark says the rollout of its 4G services in Waikato will help dairy farmers.

“Earlier this year one of our customers, Craig Waterhouse, a Morrinsville dairy farmer, used his mobile device (the HTC One M8) to access 4G on the 700MHz spectrum as part of a trial we ran in Waikato.”

During the trial he used LIC’s pasture app Minda Pasture to record pasture covers during a farm walk. The data he was collecting could then be uploaded automatically in the paddock to Minda Land & Feed.

“We’re also seeing access to fast mobile speeds influence the companies creating these new technologies, such as mobile apps, and the way they’re being presented to customers.

“Apps such as LIC’s Minda Pasture, DairyNZ’s FDE calculator or Fonterra’s Fencepost app make everyday tasks simpler and faster. And the design of these apps paired with 4G encourages and allows dairy farmers to analyse and manipulate the data they collect, for more informed decisions.”

Spark Networks chief operating officer David Havercroft says the 4G rollout in Waikato marks a start. “Over the next few months we’ll widen our 4G footprint in Waikato, including the Coromandel, and will bring this technology to existing sites by February 2015.

“Before Christmas this year we’ll also extend our coverage to Rotorua, enabling 4G over 700MHz in the northern part of the region, building on our existing 4G coverage in central Rotorua on the 1800MHz spectrum. This is part of our broader plan to extend 4G on the Spark network to other locations across the country.”

Faster speeds result from Spark having bought more “spectrum blocks” in the 700 MHz range, Havercroft says. “The more spectrum a mobile operator has the faster the speeds it can offer to its customers and the more data it can carry. So, for our customers this will mean much faster access to online content on their mobile devices, wherever they’re located in 4G coverage areas.”

Spark expects 10 devices will work on the 700 MHz spectrum by the end of this year.