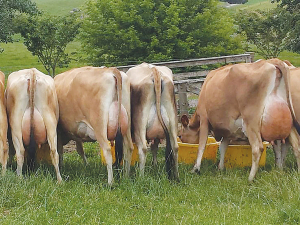 Non-pregnant cows make up the greatest numbers on dairy farm cull lists and are the main driver of the status quo replacement rates.

Also, the advantage New Zealand dairy farmers have over their overseas competitors is our farming system which matches cow feed demands with cyclical weather patterns and grass growth in what we call the ‘pastoral dairy season’.

Over the last 100 years, by a process of culling non-pregnant animals, NZ has bred a strain of cattle that is highly fertile by world standards.In few other countries are cows required to calve, lactate and then calve down 12 months later.Over recent years NZ non-pregnancy rates have increased because:

1. Higher producing cattle are harder to get incalf because they are partitioning more feed to milk production

2. Increased use of overseas genetics has imposed less pressure on fertility

3. Of the removal of cow inductions to keep calving patterns compact.

Increasing data is showing that Jersey cows have a 4-5% higher pregnancy rate than the larger Holstein Friesians.Crossbred pregnancy rates sit mid-point between the parent breeds or possibly just on the higher side of the mid-point through some small heterosis impact.There also seems to be a link between a higher feeding level in a farming system and a higher non-pregnancy rate.But although initial instincts are that better feeding should improve fertility rate, globally the reverse occurs.The higher the feeding level/milk production, the poorer the fertility result.

- Shorter interval between calving and first heat (is this explained by genetics or by Jerseys having smaller calves relative to their own liveweight?)

Mainly from the impact of higher incalf rates — but also as a result of less lameness and feet damage, less calving difficulty, and fewer collapsed udders — year-on-year sustainable required replacement rate is about 17% for Jerseys and 22% for Holstein Friesians.

The economic benefits are clear to calculate. Also, there are animal welfare benefits of cows enjoying a longer life, and environmental benefits of lower carbon emissions from lower required replacement rates.

Top quality Jersey cows sold at an average of $5364 at the recent Jersey Pride Elite Jersey sale in Wellington.

Two groups committed to the Jersey breed are joining forces and expertise to breed even better cows.