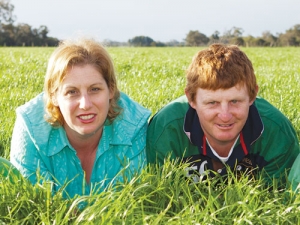 Western Australian dairy farmers Ruth and Ian McGregor can only rely on pasture for five months of the season on their Chapman Hill farm, near Busselton, so each blade grown must be maximised.

The precision displayed when estimating feed budgets is also applied to all aspects of the family farm, including mastitis prevention and heat detection.

The couple milk 300 Holsteins on a 132ha effective milking platform, with a further 140ha leased run-off block. The first-generation farmers have been on this farm for eight years.

With fresh pasture available for five-six months of the year, the McGregors have fine-tuned their feed budget to ensure their herd’s milk supply is consistent.

“Milk in the vat is the ultimate goal. You have to maximise milk in the vat every single day, and that requires appropriate feed reserves,” Ruth said.

The break has always arrived on their farm but an early arrival or a late finish can provide an extra three-four weeks grazing, which makes a big difference in production and expenditure.

The McGregors aim for 1050kgMS/ha from their effective milking platform, or about 600kgMS/cow. In a good year, this can lift to 1100kgMS/ha, and in a poor year this can drop to 1000kgMS/ha.

Cows are fed homemade silage and some purchased hay and grain, from December until at least the end of May. Depending on the timing of the break, they will start grazing from early June until the third week.

The McGregors produce all their own silage from their dairy platform and their run-off block. Some hay is purchased and used in winter with fresh pasture.

A feed budget is produced in November when pastures are finishing off to ascertain how much grain must be purchased each month and in what type, to balance available feeds for the coming year.

Ian has built up a good relationship with a local feed supplier and submits his order in good time. “If the growers know in advance, they can hold it back, or decide otherwise.”

They produce all their own silage and would ideally like to produce 100t more than they do to feed to young stock, but in the trade-off between quality and bulk quality is always retained.

“It’s always a really tight period at the end of the season. We’re desperate for cows to get on grass, and there’s always uncertainty with the break.

“There is a transition period of four to six weeks when grass comes in and it would be good to transition with silage rather than hay, but it’s hard to do.”

In producing their own round-bale silage the McGregors are always reviewing latest ryegrass varieties. They have increased their use of inoculant and use shorter chop lengths to improve silage preservation.

All silage is tested through feed labs and they aim for a minimum of 10ME.

The McGregors have noticed a variation in results from different feed laboratories – and they’re not alone – and advised farmers to be wary when having their own feed tested.

Their simple feed-out system, placing the round bales on the ground, belies the precision in estimating how much is laid out.

The WA Department of Agriculture has measured their waste at 2% - the average for WA was 2.5%. Their attention to detail ensures the correct amount is distributed each day.

“We monitor the vat every day and the ration every week, and reassess it and tweak it if need be. If your feed budget is right, and you feed good quality silage, there should be minimal waste.

“We’re measuring this stuff all the time – how heavy the bales are, the feed results, calibrating feed, calibrating rations at the mill – to maximise the efficiencies of feed that’s available.”

They use the programme Rumin8 to assist them and say it’s invaluable. “You get good at measuring, good at recording,” Ruth said.

“Frank Tyndall from Maffra gives me the discipline to record what’s been fed to the herd every 10 days. He prepares graphs and if they show a sudden jolt, I’m doing something wrong and I need to make some adjustments – fast!” Ruth said this process enables them to do the best with what they have.

The McGregors sow later-maturing annual pastures in their dryland system, including some Italian varieties, over-sowing as much as they can. About one-quarter is renovated each year, depending on the budget.

Leaf emergence rates vary year to year, and can also vary across the season, with variations of 8-15 days to leaf. “I aim to be 2½ to 3 leaf, early in season closer to 3, later in season 2½. The ideal is to have cows in 2.8 to 2.9 so we monitor leaf emergence rate closely.

“We prepare a pasture budget at the beginning of the week, which shows which paddock is to be grazed and for how long. We need to get it right every time.

“Grass is huge for us; with such a short grazing season, you have to nail it,” Ruth said. “The trick is getting it absolutely right every day of the year. That’s what maximises the vat every day.”

Although they would prefer to calve twice a year, the McGregors calve in three batches because of some declined success with fertility.

The main calving is in autumn for about nine weeks – usually from March 1 to May 15; with a second calving lasting five weeks from the last week of August to September 30; and the third calving running four weeks from December 10 through to January.

Ruth said the three calvings have evolved but it has proved beneficial as WA processors want a flat milk supply.

“We would get to the point where we would have 50 cows in the herd not in calf at the end of spring mating, so we’d have to have another go. It requires a bit more effort and is less labour efficient, but it’s nice for cash flow.”

The McGregors made a subtle but effective change to their heat detection practices 12 months ago.

“We have spent more time in the last 12 months on heat detection,” Ian said. “It comes back to hours spent with cows. All aids are good, but you can’t beat time spent with cows.”

The McGregors and their staff now spend 10 minutes in the morning and a further 10 minutes at night observing cows.

“We made observation a specific job, rather than just checking for heat on top of other jobs. It means you concentrate a bit more.”

More cows are now being presented for AI in a timely manner and the submission and conception rates have both improved as a result.

They now have three-week submission rates better than 90%, and an average conception rate of 42% for everything mated. The conception rate has improved from 27% from staff and 35% from Ian.

The McGregors train their staff thoroughly in mastitis.

They regularly feature in the Dairy Australia Milk Quality Awards for top 5% in the country, and have also been placed in the top 100 in the country.

“You can’t affort to sit on your laurels with mastitis,” Ruth said. “It’s a moving target, it’s multi-factored, so you have to be onto so many things.”

Staff training focuses on early detection, spray technique and mastitis indicators in the dairy, with incentives for staff to keep BMCC low.

“There is a lot of in-house training, procedures and systems in place, and we work with staff until we’re confident they fully understand.”

Ruth said 50% of mastitis control involves a good spray technique. The highest infection rates on the farm occur at calving so cows are dried off routinely with both Dry Cow and Teatseal; calving paddocks are kept clean; cows are moved regularly; herd testing is conducted; and sub-clinical milk is fed to calves. A mastitis focus report is issued twice a year and this is constantly reviewed by the team.