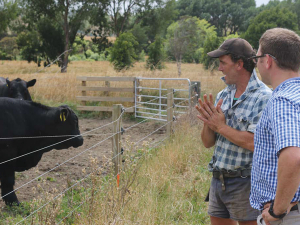 It will be up to farmers to report problems with tags as a push begins to improve livestock ID and tracing standards, says OSPRI.

OSPRI says it will scrutinise the tag manufacturers and will demand better tag retention under three new standards for NAIT.

And a new tag reporting process will include more education for farmers on how best to apply and replace tags.

This development will help OSPRI to improve the integrity of NAIT data alongside the key traceability aspects of tag retention and readability, says the head of NAIT, Kevin Forward.

“We’ve listened to farmers, and its apparent there are issues with tag retention.

“The new Animal Identification Device Standard will ensure tag manufacturers are held accountable for their products and that they meet international standards.

“It’s up to farmers now to report issues with tags. OSPRI will manage this process with NAIT reporting annually on complaints received and any emerging trends.

“While these changes may in the short term impact on tag manufacturers, accredited entities and information providers, it will encourage them to improve their services and products and this will lead to better outcomes for farmers and the industry.”

The new NAIT standards and guidelines will bring added value for farmers and NAIT users, says Forward, and the tag manufacturers, accredited entities and information providers will be more closely watched. These changes follow the recent NAIT standards consultation.

“We thank everyone who participated in OSPRI’s consultation,” says Forward. “This helped guide our final recommendations and ensured that farmers and industry all had a voice.

“The three new standards will mean more targeted performance and monitoring of third party information providers to NAIT. They will also provide more accountability on livestock data transfer and privacy with formal contracts, regular audits and renewal of accreditation every three years.

“The NAIT system can no longer operate in isolation. Improving how the NAIT system works with third party providers is vital for supporting biosecurity preparedness or a response in the event of a future incursion.”

OSPRI will tell accredited entities about the re-accreditation process.

Many of the changes to the standards result from the NAIT review and recommendations noted during the response to Mycoplasma bovis.

In November and December 2018, MPI consulted its public on recommendations for improving NAIT via legislation or changes to the rules. Three proposed standards then went to further consultation in early 2019.