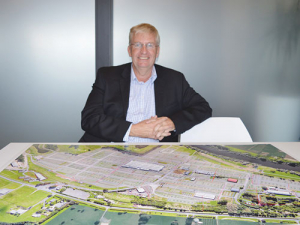 National Fieldays is living up to its theme ‘Leading Change’, having spent $1.3 million to revamp the Mystery Creek site.

Chief executive Peter Nation says the infrastructure changes result from feedback from customers and staff, to allow “better utilisation of space and assets and to give customers a better experience,” he told Dairy News.

Nation says customers and exhibitors will be able to see at night when arriving or leaving the event.

“At Gate 2 hill we have taken out trees, widened the road and lit the pedestrian area with LED lights.”

Major drainage work has been done around Gate 4 and heavy machinery is relocated there; ‘rural living’ is relocated from there to the bottom of the hill, next to the ‘town and country’ sites.

The Bledisloe Hall, which hosted town and country exhibits, has been set up as the new VIP function centre.

Nation says at previous events, VIPS were either entertained on-site or at restaurants in Hamilton. With its own kitchen and bar facilities, the Bledisloe Hall will now host all VIPs.

“Our VIP guests will now have only a short walk to their functions,” Nation says.

This Fieldays will have 1587 sites – more than last year; all sites were booked before Christmas 2016.

Contractors are now on site, setting up marquees and buildings for exhibitors.

To make the construction process easier, the Fieldays society had the whole site GPS mapped below and above ground; all site infrastructure is now on the GPS map.

Nation says he was told it was the biggest private civil GPS mapping done in New Zealand, with over 10,500 points of interest. Sonar was used to find all power, water and telephone lines underground. The site has a massive underground network of copper and fibre optic cables.

“Now we know with pinpoint accuracy where they go and where the joint points lie…. GPS mapping above ground has made all sites symmetrical; and site marking that once took weeks now takes only days.”

The Fieldays has integrated the GPS maps with a new software system for event planning.

“Our boys sign off 1800 hole approvals for posts and poles; now we know accurately where the cables are; in the past it was in someone’s head.”

Rest your legs, recharge your phone

Four new foodcourts will allow visitors to eat sitting down, rather than standing around hot dog stands.

“We have put in four massive foodcourts instead of having food stalls all around the site; people can go there and refuel… sit down and rest,” says Peter Nation. Wi-fi and cellphone recharging will be available at the foodcourts.

Next month's National Fieldays will attract visitors from 20 countries.

Fieldays chief executive Peter Nation says it will be the biggest international delegation ever.

Nine countries are exhibiting at the Fieldays; others are sending trade delegations or visitors.

An international dinner will held at the Fieldays to promote NZ Inc.

The New Zealand National Fieldays Society has made a donation to the Rural Youth and Adult Literacy Trust.

The painted rock hide-and-seek craze that has taken the world by storm over the past couple of years has popped up at National Fieldays.

Jobs of the future on offer at Fieldays

OPINION: National Fieldays next week will be an opportunity to see what a career in agriculture has to offer.