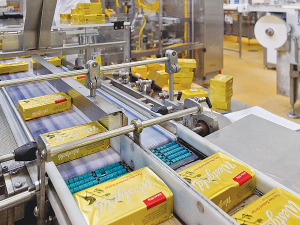 The new plant will produce a range of butter packs from 180g up to 1kg blocks.

A unique gold rush started last week with the official opening of the new $40 million butter plant at the Chinese-owned Westland Milk Products plant on the West Coast.

The plant has already been operating for about eight months, but the official opening by Agriculture Minister Damien O’Connor was delayed because of the Covid pandemic. The new plant doubles the capacity of its butter facility enabling it to produce up to 42,000 tonnes a year.

O’Connor told those at the opening that the investment in the butter plant represented real value for the future of the dairy industry on the West Coast. He says it’s great to see this continued investment by Westland Milk Products.

Westland chief executive Richard Wyeth says the original butter plant built in 1973 has made way for a purpose-built facility that will double its capacity of small-format butter pats with modern, state-of-the-art machinery that still holds true to tradition. The new butter churns were built by the German food and technology company GER and, according to Wyeth, it is world class equipment which still uses traditional churn methods.

Work on installing the new butter plant began at the end of last season, which Wyeth says was challenging.

“We had to stop production in the old plant, take it all out and then shoehorn the new plant into the old building. This building required earthquake strengthening and some asbestos to be removed, so it was a really complicated project putting new plant into old buildings in just four months.”

The new plant incorporates some new technologies, especially in the packing area. It is now producing a range of butter packs from 180g up to 1kg blocks. These are being sold on the NZ market but also being exported to Australia and the US.

“We have no intention of taking our foot off the accelerator as we continue to execute our five-year business strategy,” says Wyeth. “The progress we have achieved one year into the plan has been fantastic. It’s a result that everyone involved with Westland should be extremely proud of.”

Wyeth praised the work that Westland’s original staff contributed towards the heritage of the company as well as the efforts of his current team. He also praised suppliers and partners for helping turn around the company’s performance in the first half of the financial year.

“The team has really worked hard to deliver not only a great outcome in this facility, but across the business to drive the Westgold brand into new markets. We acknowledge their work, and the work of everyone across the business who has worked with Westland since the butter plant was first built in 1973,” he says.

Westland Milk's decision to stop collecting milk from farms owned by reclusive Christian community Gloriavale is heading for a showdown in court.

Fonterra has launched its ‘carbonzero’ certified NZMP organic butter to the North American market, the first such ingredient product in its portfolio.