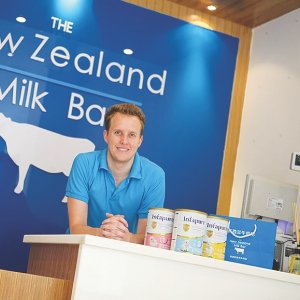 MPI is investigating whether proper procedures for such products are being followed. And the marketing tactics of some importers in China are causing concern for authorities and exporters here.

Auckland supermarkets were caught last year selling baby milk formula to Chinese exporters thousands of cans at a time while rationing them to other shoppers. This bulk trade was unknown to export authorities at the time.

An MPI spokesman told Dairy News it has been investigating infant formula exports to China for some time but will not comment further until the investigations are over.

A premium has attached in China to New Zealand-made dairy products since the melamine tainted-milk scandal in 2008, when six children died and nearly 1000 were hospitalised after melamine was added to formula supposedly to increase protein content.

A growing number of New Zealand companies export own-brand formula to China but the product is sourced from only a few processors here. GMP Pharmaceuticals, Auckland, recently opened a factory supplying about 20 exporters.

One GMP customer, Cowala, used a picture of Prime Minister John Key to advertise its product. The picture was taken at GMP’s factory opening.

Another exporter, Abid, used a picture of the Prime Minister, mispelling his name as ‘Jhon Key’ next to a quote ‘I Love abid’.

GMP New Zealand manager Minesh Patel says the company is not marketing or selling infant formula. “We have written to all customers saying do not use any of our plant opening photos without our permission,” he told Dairy News.

“The New Zealand brand is trusted and considered best quality. Some Chinese marketers will use any marketing trick to promote their ‘NZ brand’ whether genuine or not. This is a widespread problem. The Infant Nutrition Council, the New Zealand government and the Chinese government are all aware of this.”

Carey says it is helping in MPI’s investigation. Though infant formula trade from New Zealand is properly regulated, “some middle men are getting around the regulations”.