Buffalo herd milked by a robot 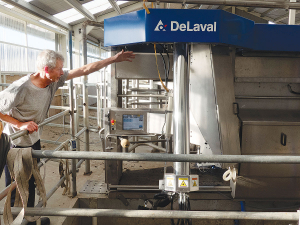 The modified DeLaval robotic milker for the buffalo herd.

Nestled in the hills on the edge of the Canterbury Plains is a small and surprisingly high tech buffalo farm.

Wairiri Water Buffalo is believed to be one of only three commercial buffalo herds in the country, and the only one – despite the small size of the herd – running a DeLaval robotic milker.

Wairiri is owned by couple Lucy Appleton and Christo Keijzer, who have been farming buffalo since importing a few animals from Melbourne about 2008. They have used pure bred Italian bulls and Italian AI to produce what they believe to be the purest Italian river buffalo herd in New Zealand.

Compared with African and swamp buffalo, riverines are the best milkers, they say. They produce up to 12L/day each of high fat, high protein milk.

Their 37 animals include one of only three purebred bulls in NZ, and they milk up to a maximum of 20. They milk all year round, with 10 now milking and an eleventh due to calve in a couple of weeks.

The milk is processed in a new modern cheeseroom with a pasteuriser and mozzarella maker, but pride of place goes to the deLaval robot in the adjacent milking shed.

Keijzer knows of “a few” robotic milkers for buffalo in Italy, and one in the Netherlands. “With buffalo this is definitely very rare, worldwide.”

Appleton says the robot is a “lifestyle choice” because of its ability to work largely unsupervised once all animals are trained to use it.

The machine reads RFID ear tags to identify each animal and uses a laser to locate the teats and place the cups. It has to be taught where the teats are on a new animal but updates and re-learns for itself after several milkings.

It has four separate cups and hoses, so manages each quarter separately, warning when a quarter gives more or less than expected, diverting the milk if it detects a problem like high cell count, removing the cup when finished and letting the cow out when all are done.

Each animal also gets a ration of grain tailored to her needs.

When milking is finished, washing the machine down is a single button push. “It’s very, very smart,” says Keijzer.

The robot has been modified for buffalo, being wider than usual and with stainless steel sheet walls and ceiling to protect hoses and other machinery from the horns.

An electromagnetic lock is fitted to the exit door as backup for the pneumatic ram. Keijzer says regular cows don’t usually try to get out but buffalo would otherwise push it open.

Wairiri is now in its low season, making cheese three times a week -- about eight different types, most them of them Italian stretch curd cheeses (with some of the elastic stringyness of a pizza topping).

They also produce yoghurt and milk.

All product is pasteurised and the operation is MPI certified and audited.

“You can’t just do it in your back yard but I think that’s a good thing,” says Appleton.

“I trained as a cheesemaker before we started, which helps a lot because you know the dangers of salmonella and listeria and things like that. You definitely have to do training before you embark on something like this.”

Appleton says buffalo naturally produce A2 protein. They sell though farmers’ markets, restaurants and wholefood shops, and by direct order from their website.

Most of the cheeses are to be eaten fresh and can sometimes be in a restaurant the day they are made. Appleton recommends a classic Italian salad of mozzarella, tomato and basil.

“People can have really fresh mozzarella that you normally can’t get in New Zealand. In Italy that’s the way they all eat it. So in summer we usually make it on Friday and out to the market on Saturday.”

Wairiri Water Buffalo is located on about 40ha in the hills just west of Coalgate, near the Selwyn headwaters.

Lucy Appleton and Christo Keijzer, say it is one of only three commercial buffalo herds in New Zealand. The other two are in the Auckland region.

Farm parks and lifestyle blocks where people raise buffalo for home kill or pets are “dotted around” the country, creating a market for their steers, says Appleton.

She says their strategy is a small and ecological operation with no irrigation and low stock numbers.

“It’s a different approach, more like old farming. We will be putting quite a lot of tree lines back in to help give them shade in summer.”

Waterways are already fenced off and a native reserve is planned. About half the farm will be grazing and half will eventually be trees.

The farm has a high natural rainfall, two or three times that of the plains, and peat soil that holds the moisture well.

Keijzer says it would be too wet for regular dairy cows but the buffalo can handle it with their large cloven hooves that spread to bear their weight.  They get no foot rot or lameness and hardly any mastitis, he says.

The farm is also largely self contained with hay or silage only bought in when short, along with a little grain to feed in the milking robot.

Keijzer says the powerful animals respect electric fences but have little regard for conventional fences and can easily destroy a galvanised steel gate. They are also surprisingly good jumpers.

Visitors to the farm don’t get to see milking since the cows don’t let down if there are strangers in the shed. They don’t like change and will get spooked by a passing hot air balloon but are otherwise very calm and like to be petted by people they know, he says.