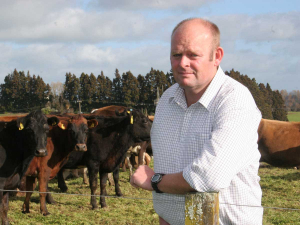 New Ballance chair Duncan Coull says he’s passionate about the role co-ops have and can play in securing the future success of the primary sector.

The Otorohanga farmer replaced David Peacock who retired at last month’s annual general meeting after fifteen years as a director and seven as chair.

“David’s farmer focus, willingness to take risks, and commercial acumen will be missed,” says Coull. “Ballance has a strong legacy of good leadership throughout the organisation. As a board we are aware of our responsibility to ensure this continues.

“I’m very passionate about the role co-ops have and can play in securing the future success of the primary sector.”

He says the cooperative has a history of investing in innovation backed by science, which will help farmers and growers navigate the changes ahead and continue to thrive and succeed on a global stage.

“We are cautiously optimistic about the foreseeable future. While it’s important to reflect on the huge amount we have achieved over the previous year, it’s even more important that we look forward together and focus on the challenges and successes for FY21 and beyond,” says Coull.

Also at the AGM, Ballance shareholders voted to amend the cooperative’s constitution to allow all shareholders to be able to vote for any vacant ward position regardless of where their principal residence is.

This is in line with further provisions that have been previously modified to remove outdated references to legislation and bring the constitution in line with current market practice.

The constitutional change is effective immediately and will apply to the next board elections and AGM.

Meanwhile King Country sheep and beef farmer Dani Darke beat five other candidates for the North Ward seat on the board.