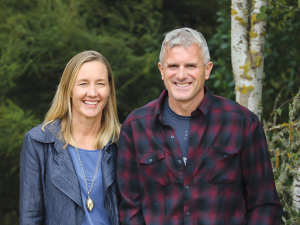 A prominent couple in New Zealand’s dairy industry are turning to plant-based protein for their next big venture.

The company says it will combine existing and new technology to produce a range of high value protein concentrates for leading food companies worldwide.

It also seeks to play a role in agricultural sector transformation, partnering with farmers to reduce on farm net emissions of nitrogen and methane.

By using leafy crops that remove nitrogen from soils, Leaft expects to produce protein with a lighter environmental footprint than either animal or grain based sources.

It will also produce a reduced protein, high carbohydrate, silage-like stock feed – essentially the residue from the protein extraction – which could increase animal performance and reduce nitrogen losses from dairy and beef systems.

John Leyland Penno said the venture arose out of their looking to help Canterbury farms with their environmental challenges in a way that benefits everyone.

He said the concept of extracting protein from leafy plants is not new. While working as a scientist at Ruakura (before launching what was to become Synlait in 2000), he saw the end of plant protein research there. But he says the value of plant proteins now differs much from then.

They have been working with research institutes, universities, agricultural advisors and farmers to put their system together, and chose to launch the company now as it is time to employ a bigger team and start moving from feasibility to production.

He hopes to be producing the first commercial product in about 18 months.

“If we can get the last of the technical problems solved then it will scale as fast as we can build demand for the product.”

Leyland Penno said it is too early to identify specific crops but they think their process will work with a range of crop species.

“We don’t want to introduce too many things at once. If we can use existing leafy crops that farmers are used to growing, or that there’s good technology for growing, that makes implementation much easier.

“There are a few risky steps along the way but if we can hold those away from the growing end, especially in the first few years, that’s the way we want to do this.”

The Lincoln company does not yet have premises but some parts of the process would initially use spare capacity at existing facilities.

The couple say the global food industry must change in order to responsibly feed a rapidly growing population while protecting the planet, and they want Leaft Foods to be part of the solution.

“One of the critical factors behind these strengths has been the ability to grow green leafy crops,” she said.

“We have created Leaft Foods to meet the needs of global customers and provide real options to diversify farming and support the changes needed to reduce the environmental issues caused by excess agricultural nitrogen.”

Leaft general manager Ross Milne said the company hopes to be a catalyst for the food and farming industries to innovate and evolve towards a healthier, sustainable future.

Leaft is now advertising for a farm systems specialist, a food technologist and a process technologist.