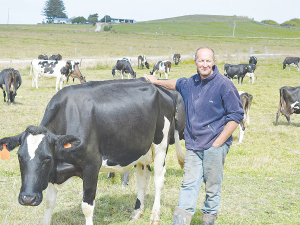 Cameron claims that private property rights are under threat thanks to the Government's directive to councils to identify and manage SNAs.

Cameron attended at protest meeting in Northland last month when more than 500 people called on the council to drop SNAs policy.

SNAs were brought in under the Resource Management Act in 1991 when councils were charged with identifying and protecting areas with significant habitats of indigenous biodiversity.

Around 60% of councils have identified SNAs but the Government admits the work has not been done in a consistent way due to lack of clarity.

That has led to loud opposition from farmers and iwi and some councils have scrapped or shelved the process.

The Far North District Council voted recently to continue developing the content for the draft District Plan, but to remove SNA maps developed by ecologists from the document.

The council's strategy and policy committee chair Councillor Rachel Smith says the decision endorses an undertaking Mayor John Carter made in June to 'pause' the mapping of SNAs.

"This followed protests by tangata whenua, farmers and other landowners who said the proposal to identify land as SNAs undermined their sovereignty and property rights.

"This opposition culminated in a large hikoi to the Council's Kaikohe headquarters where tangata whenua delivered a petition against the process," she says.

"Our decision provides a clear way forward for our draft district plan, while acknowledging more direction is needed from central government on how to support landowners to protect significant species and habitats."

Cameron believes the council has done the right thing because "the depth of feeling was clear, people were angry and worried about this policy".

"Actively punishing people if they look after their wetlands is among the worst policies this Government has put in place.

"There's a better way. Landowners, councils and conservationists already work together to protect indigenous biodiversity. Instead of land grabs, the Government should be supporting these pre-existing efforts."

Significant Natural Areas (SNA) are becoming a very important topic for farmers who are finding that parts of their properties have been or will be designated as SNA’s due to a perceived high level of indigenous biodiversity and will be captured under the proposed National Policy Statement (NPS) for Indigenous Biodiversity.

Grey District's mayor is unhappy at the lack of response from government ministers about concerns from West Coast leaders and iwi on Significant Natural Areas (SNAs).

OPINION: Your canine crusader understands that the unrest and unease around the country about government-imposed, controversial mapping of Significant Natural Areas (SNAs) is all the fault of redneck, racist farmers in the South.