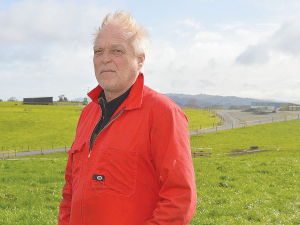 Smit has filed loss of income claims for two farms from where 660 cows and 300 heifers and calves were culled. Two claims totaling $220,000 have been sitting with the Ministry of Primary Industries (MPI).

Another claim of about $80,000 will be filed once the final payout for last season is confirmed by his milk processor Open Country Dairy.

The claims relate to 60 days of lost income: M. bovis farms may only restock and milk again 60 days after the last cow has left the farm.

The M. bovis saga has also taken a toll on his staff Smit claims. He says one farm manager tried to commit suicide after weeks of killing calves with a captive bolt gun on the infected farm. The farm manager has since left New Zealand.

Smit says the stress of dealing with M. bovis hasn’t been helped by MPI’s delay in compensation.

He says claims by MPI that it’s taking on average 24 days to pay compensation are “a load of rubbish”.

“I know of several farmers who have gone bankrupt while waiting for compensation,” he told Dairy News.

Smit concedes that MPI has gone back to DairyNZ seeking more information on his claims after some discrepancies: the number of cows being milked did not tally with the number of cows moved off the farm. He says that seven or eight cows were dried off as they recovered from thilleria. A farm manager missed calved cows that were therefore not milked.

But Smit says that’s no excuse for MPI to delay paying his compensation claim for five months. Last month he received $40,000 for calves killed on the farm.

“It’s a sick system. MPI says it takes them on average 24 days…. Well, bar one claim all my other claims took five to seven months before I got paid.”

Smit says he has tried to contact MPI but to no avail. “You can’t just talk to someone and ask ‘when are you going to pay me?’ Other farmers are telling me the same thing.”

Smit suggests that every farmer affected by M. bovis should have a liaison officer who can help with compensation claims and make decisions on the spot.

“It should be very easy to work out my income losses, but with these clowns it’s never-ending.

“They claim to have 35 lawyers and accountants working in MPI. Every time I file a claim I must submit sworn affidavits stating the information I am providing is correct -- and I would have spent $1500 on affidavits alone.

Smit says the Dairy NZ/BLNZ Compensation Assistance Team (DBCAT) has helped him in the claim process, however they have been unable to speed up the process. The rest of DairyNZ has been unhelpful. “Apart from asking me not to comment in the media about M. bovis they haven’t been of much help.”

He says the “broken” NAIT system is also making things difficult for farmers. For example, while scanning a truckload of cows leaving Smit’s farm, he says AsureQuality staff found one cow without a NAIT tag. When the truck got to the works 13 cows were missing tags. MPI charged him $30 for every missing NAIT tag.

Smit says he has no idea how the tags disappeared; they weren’t in the truck.

Smit was ordered by MPI to cull 660 cows on two of his three farms after they tested positive for M. bovis. On one farm the disease was only found in the bulk milk and never found in cows: one cow from the other farm tested positive at the works.

Henk Smit has tried to sell his home farm and leave New Zealand after the bitter experience with MPI.

He put his home farm on sale but people who responded were worried about M. bovis.

Smit operates three farms, one in partnership with his son. On two farms he had to cull 660 cows and 300 calves before restocking after 60 days. On one farm only one milking had tested positive for the disease. On the other farm only one cow was found with M. bovis at the works.

He isn’t impressed with the hype about M. bovis.

Smit says restocked cows came from over 30 different sources for his two farms.

He says finding out the status of the source farms was difficult as MPI did not divulge information due to privacy concerns.

MPI’s director of its M. bovis programme, Geoff Gwyn, says that of the 12 claims submitted by Smit (across two entities), 10 have been paid.

Meanwhile two, for consequential loss of milk production, are under final review.

“While the animals may have been culled over five months ago, the loss cannot be assessed until a claim and all supporting information have been received by MPI. One of these claims was only received last month,” he said.

Gwyn says Smit has received “several hundred thousand dollars” in compensation and the two remaining claims mentioned above are expected to be processed within the next two-three weeks.

“We remind farmers that help is available to compile and submit claims -- a service available from DairyNZ and Beef + Lamb NZ compensation assistance teams. This free service is supported by MPI and run independently by DairyNZ and BLNZ.”

On affidavit expenses, Gwyn says all claims must be signed in the presence of an authorised witness such as a Justice of the Peace, a barrister or solicitor, because the compensation claim form is a legal document.

“Many of these will make their services available at no expense to the farmer.”

In some cases (and in the case of some of Smit’s claims), where there is insufficient information to support a claim for loss, MPI may require a sworn affidavit by a farmer to confirm that the claimed events and loss are an accurate representation of what occurred on their farm.

“The M. bovis programme has not said that legal expenses cannot be claimed for. If a farmer believes they have suffered a loss as a result of MPI’s exercise of powers, they may submit a claim for this loss and it will be assessed on its merits on a case-by-case basis.”

Gwyn denies that MPI took out a court order to gain access to a third Smit farm.

“That is incorrect, there is no court order. The farmer involved has refused to allow testing to be conducted on his property. The property is a back-trace and therefore at very low risk of infection. The testing will be carried out when it is safe for our staff to do it. “