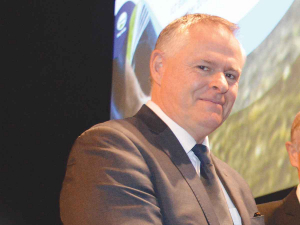 Peter McBride joined the board “just to make a contribution to the dairy industry”.

“I joined the board in 2018 to serve as a director although they may have been other expectations of me,” he told Dairy News.

McBride, who runs a 950-cow farm in South Waikato with wife Linda, was chosen by the board last month to take over from chairman John Monaghan when he retires at the co-op’s annual meeting in November.

At the time of his election to the Fonterra board, McBride was touted as the next chairman.

The chairman is elected by the 11-member board and must be a farmer-elected director.

The former Zespri chairman says he is humbled to be selected by his fellow directors and is looking forward to leading the co-operative on behalf of its 10,000 farming families.

McBride will take the helm of the co-op in challenging times. The co-op suffered two consecutive years of losses and a global recession looms as a result of Covid-19.

He says Fonterra is in a much better position than it was 18 months ago.

“There has been a big turnaround and the management has done a great job,” he says.

On Covid-19, McBride says, from a New Zealand perspective, it has highlighted dairy’s importance to our country.

“It’s such a critical part of GDP going forward.”

But McBride says the industry must get the balance right and work to further improve sustainability.

He believes NZ is in a competitive position with one of the lowest carbon emissions per kgMS in the world.

McBride will work with Monaghan over the next few months before “leading our co-op into its next phase and creating value for the benefit of our farmer owners and unit holders”.

“When John retires from the board in November it will mark almost two decades of service to our co-op, the last 12 years as a director. He will leave behind a board culture of shared responsibility, which is something I will look to build on as the new chairman,” says McBride.

He grew up on a dairy farm near Te Aroha before his father sold the farm and moved into kiwifruit horticulture in Te Puke.

He holds a Bachelor of Horticulture from Massey University and a Post Graduate Diploma in Commerce from Lincoln University.

McBride and his family are based near Tauranga on an avocado orchard.

A Fonterra statement says his corporate agricultural experience has provided him with exposure in a number of international markets, in particular the Asia Pacific Region, Middle East and Latin America.

“Peter has leadership experience in the New Zealand rural sector through his work with Zespri, particularly in his command of the PSA crisis, which had the potential to decimate the New Zealand kiwifruit industry,” the statement says.

In 2018, McBride was awarded Horticulture NZ’s Bledisloe Cup for leadership, and Deloitte NZ Chairperson of the year. He was praised by the Deloitte judges as chairing a united and constructive board.