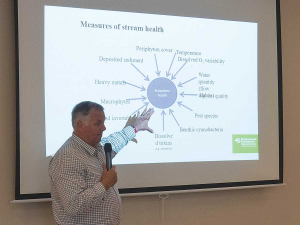 The limits are contained in the proposed national policy statement on freshwater.

“Rough modelling” done on the catchment suggested that 15-20% of it could be intensive but the rest would have to be in dryland sheep farming or forestry, he said.

Davie was speaking at a New Zealand Institute of Primary Industry Management (NZIPIM) forum on the practical steps farmers can take to improve water quality.

The forum, at Lincoln, occurred on the day submissions closed on the proposed policy statement, which among other things suggests a national limit of 1mg/litre of dissolved inorganic nitrogen (DIN).

“To get our spring-fed systems to a value of 1 would require, under current management practices and the best that we can do, would require a land use change,” said Davie.

Explaining some of the underlying science, Davie said there was more to stream health than just nitrogen and nutrients, which is why the policy statement on freshwater was bringing in other measures.

He said the nitrate ion NO3 is toxic to aquatic species, impairing breeding and other functions above about 2mg/litre.

But it was important to distinguish between toxicity and eutrophication -- the growth of “stuff” in waterways including algae and weeds. The dissolved inorganic nitrogen (DIN) measure is being brought in because it includes ammonia and nitrite as well as nitrate, and all are drivers of eutrophication.

Davie also explained that the region’s alpine-fed rivers generally had low DIN concentrations, most of them well under 1mg/litre, but a lot more of the spring- and groundwater-fed streams of the lower reaches of the plains were well above 1mg.

“The proposed DIN limits are a significant challenge for our spring-fed streams,” he said.

DairyNZ water quality specialist Justin Kitto said the proposed policy statement put a huge weight on managing a complex interactive system on two measures – a DIN of 1 and a DRP (dissolved reactive phosphorus) number of about .02.

But there was a lot of controversy around that and concern about how those numbers have been come up with, he said.

DairyNZ’s recommendation was that the policy put the onus on regional councils to manage the ecosystem health of their rivers, said Kitto.

“As opposed to saying DIN has to be no more than 1, look at what other factors are driving ecosystem health in a given catchment, possibly more strongly than dissolved inorganic nitrogen.”

Kitto said that would be much more stringent than the current bottom line for, say, the Hinds catchment “but it’s much better off than 1 which is currently proposed”.

“The Government’s not going to accept 6.9. But we can’t accept 1. So we’ve got to come up with a compromise.”

Other speakers at the event included DairyNZ’s Dr Ina Pinxterhuis and Virginia Serra, and a panel of Canterbury farmers.