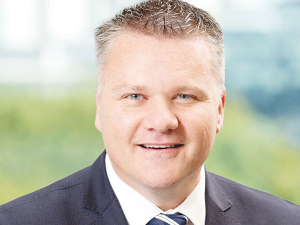 Fonterra chief executive Miles Hurrell says the lift in the forecast milk price reflects the milk supply and demand picture and the current strong US dollar.

This increases the midpoint of the range, which farmers are paid off, to $9.50/kgMS.

Fonterra chief executive Miles Hurrell says the lift in the forecast milk price reflects the milk supply and demand picture and the current strong US dollar.

The cooperative also announced a 2022-23 earnings guidance range of 30-45c/share.

Hurrell says that the strong earnings guidance for next financial year reflects an expected recovery in some of the co-op's key markets which have experienced margin pressures this financial year, coupled with ongoing favourable Ingredients margins.

"The wide earnings range for 2022-23 reflects the current high level of uncertainty that comes with operating in a globally-traded, volatile market," he says.

While the co-op is in the position to be forecasting both solid earnings and a healthy milk price for the next year, significant volatility remains.

Hurrell says these near-term headwinds have the potential to impact some of the co-op's targets.

"When we released our 2030 long-term aspirations in September 2021, we committed to updating farmers and the market on our progress along the way.

"We're still on track for our 2030 financial targets, but the last few months have shown that there will be some bumps along the way.

"A series of global events have changed some of the assumptions the co-op's aspirations were based on. In particular, interest rates and inflation have lifted well above our assumptions, as have commodity prices in response to the continued strong demand for dairy."

Fonterra's head of Africa and Middle East business Kelvin Wickham is stepping down after 34 years with the co-op.

Fonterra chief executive Miles Hurrell says this is the right time for him to step away from Fonterra as the next generation of leadership takes forward the co-op's long-term aspirations.

"Kelvin and his wife are keen to stay in Europe and I wish them all the best for their next great adventure. We've worked closely together for a number of years and I will miss his friendship, guidance, and support.

"I thank Kelvin for his extensive contribution to the co-op. He has been with Fonterra for over 34 years, holding multiple roles across many markets, and has been a tremendous advocate for Fonterra and New Zealand throughout this time," says Hurrell.