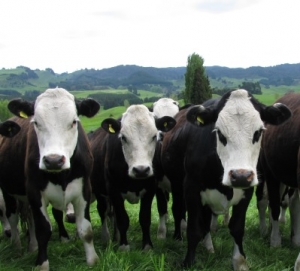 HEREFORD FRIESIAN cross calves are fetching astounding premium prices in parts of New Zealand as the annual round of calf sales gets into full swing.

"Calves with the right markings are meeting with very very strong demand,"he says.
"In general with the white head calves you will see every man, woman and dog hanging around those pens."

Lyons said the high demand was being pushed by cattle numbers, which generally aren't there and the Hereford Friesian cross is the calf that everyone wants – both bulls and heifers.

"At sales throughout the Waikato the white heads are very sought after."

He commented that Hereford Friesian cross calves with the red coat, are also meeting with better competition than previous years. He says with reductions in traditional beef cattle numbers, 'beef farmers' were relying on the dairy industry to source cattle.

Lyons says using registered Hereford bulls is beneficial for dairy farmers – a timely reminder with spring bull sales about to start.
"The registered bulls are pure, not something that looks like a Hereford," he said.

Lyons says he has seen bulls that look cosmetically like a pure bred Hereford produce progeny with speckled coats or undesirable markings.

He also says registered bulls are easy care and purchasers can buy with confidence knowing the pedigree and that they will get a good line up of Hereford Friesian cross calves when used over a good Friesian cow.
Lyon's sentiments of Hereford bulls in the dairy industry are backed up in the South Island as well. Although there is a difference in calf price, there is still demand a premium prices.
PGG Wrightson South Canterbury stock agent Jonty Hyslop says Hereford bulls play a vital role for dairy farmers in that they are a marker bull between AI and natural mating – with the unique and dominant white face being the easily identifiable marker.

"The other significant factor is the gestation period. There are some top Hereford genetics out there that are particularly short in gestation length."
A shorter gestation length means more milk in the vat and with threatening payout reductions dairy farmers will be looking for added value in their income streams.
Hyslop says Hereford Friesian calves also add value. While they don't command the same premium prices as they do in the North Island there is still a significant financial gain to be made when selling them at 4-7 days old compared to putting them on a bobby calf truck.

He says Hereford Friesian bull calves typically sell for $100 and heifers $70 compared to the average bobby calf price (dairy calves) of about $28.
He also cited the quiet temperament of the breed.
"It's very very good, especially for farm workers who are often cutting the bulls so they don't go over the platform and their feet can last well too."

PGG Wrightson dairy co-ordinator for mid and south Canterbury David Earl agrees with Jonty's comments.
He saysthe role as marker bull is probably the biggest benefit for Hereford use by dairy farmers.
"It's so much easier for staff." He said the Hereford always leaves a white face which means staff can quickly and reliably identify where AI and natural mating stopped and began.
He says there is a good market for Hereford cross calves at 4 days old.

"Anything dairy farmers can get from calves or surplus stock is good going into a season (with reduced forecast payouts) – anything is greatly appreciated," says Earl.
AgResearch scientist Dr Vicki Burggraaf says 70% of New Zealand's beef production originates from the dairy industry, yet despite this, few dairy farms use beef bulls of known genetics.

The five year Beef + Lamb New Zealand Dairy Beef Integration Programme is looking at the impact of using good beef genetics in a dairy beef supply chain and early results are showing clear advantage with the use of better beef genetics for dairy beef and a win-win opportunity for both dairy and beef farmers.

She says the use of beef sires with high estimated breeding values for calving ease, growth and carcass characteristics will produce surplus calves of higher value to dairy farmers, beef finishers and beef processors.
The NZ Hereford Association has developed some tools to help dairy farmers identify the right bull for their herd.

The New Zealand Hereford association is also the only breed with a Dairy Beef Selection Index. Found on the NZ Herefords website, this sire selection tool is economically weighted to reflect dairy beef profitability with emphasis placed on calving ease and growth. The index has been developed using all the breeding values available to give a dollar value. It is aimed at a beef market production target of a 500kgLW steer finished at 18 months. Any heifers can be on sold or for use in a self-replacing beef cow herd. The Dairy Beef index also puts focus on shorter gestation length bulls.

The World Hereford Conference will return to New Zealand after a 30 year absence.