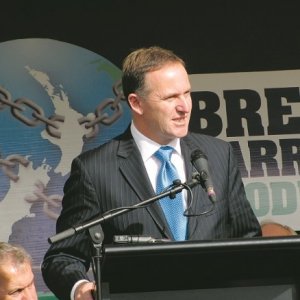 John Key says there needs to be a balance between encouraging agricultural production and protecting the environment.

Speaking at Federated Farmers National Council meeting in Wellington last week, he said while the country had an obligation to take opportunities the agricultural sector provides, everyone must act in a most environmentally responsible way.

"National is committed to creating the right environment for farming to grow and become more productive, but in a responsible manner," he says.

Key also touched on the benefits of what he called 'well-designed water storage and irrigation systems'.

"Irrigation increases the productivity of our farmland, protects against droughts and takes the uncertainty out of water flows for farmers and recreational users. Water storage is good for the environment and allows for the replenishment of aquifers."

Key also used the speech to launch National's trade policy and spoke about the importance of agriculture in any agreement negotiated by New Zealand.

"I can assure you that any government that I lead will walk away from any trade agreements that exclude our principle export interests."

Key emphasised the value of government led trade missions saying they played a vital role in opening doors that businesses alone could not do. He pointed out that much of the huge growth in the Chinese market was due to these missions. Key promised that in the next three years, his government, if elected , would lead 28 such missions to New Zealand's major trading partners including Australia, China the US and Japan.

Finally, the Prime Minister stressed that any ETS relating to agriculture may not go ahead in 2015 as planned if other trading partners had not made further progress with their climate change policies to reduced emissions.

Key told delegates that while his party was on record as planning for the gradual phasing in of the ETS in 2015 and was committed to reviewing this in 2014.

"If elected, National will not impose a liability of an ETS on farmers unless there are practical technologies to deal with emissions," he explained. "It is not fair to tie the hands of our agricultural producers when their competitors do not face similar regimes, and the ability to reduce emissions is simply does not exist." he says.

Key's speech was not his normal jovial off-the-cuff missive. He appeared somewhat tense delivering a carefully crafted appeal for the rural vote

At the end of his speech, he stayed to answer questions on such issues as rural roads, the role of Landcorp and the RMA. However, the mainstream media pack was not there to hear about trade policies, but to question him on the 'Epsom tea party'. This eventually led Key refuse to answer questions on the topic and abruptly leave the press conference.