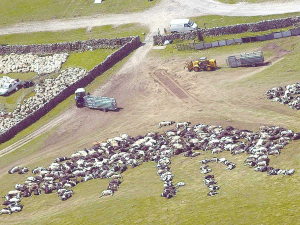 February 2021 marked the 20th anniversary of the devastation brought to the UK agricultural sector by Foot and Mouth disease.

It’s also poignant to remember that February 2021 marks the 20th anniversary of the devastation brought to the UK agricultural sector by Foot and Mouth disease. First detected at an abattoir in the South East of England, within four days, a case confirmed in Northumberland in the North East of England was proven to be the source of the outbreak, having supplied pigs to farms in Southern England, who in due course sent them to the Essex slaughterhouse.

At the same time, cases were confirmed in the South West of England and North Wales, accelerating through to early March, when up to 50 cases a day were being notified. It also saw “traders” buying stock at livestock markets, then pushing them through other markets around the country, often up to four venues per week and often without any movement records.

While it is widely believed that the initial infection came about from feeding untreated “swill”, likely gathered from food outlets, the contaminated source material likely originated in Asia, before being illegally imported in South Africa, for onward distribution.

Whilst New Zealand’s own battle with M. bovis has created untold heartbreak for those involved – currently 261 confirmed cases, the sheer scale of the 2001 UK Foot and Mouth outbreak throws up some mind-boggling statistics.

In total, around 6 million cattle, sheep and pigs were culled, with an estimated total cost to the industry of GBP8 billion. At the height of the outbreak, between 85,000 and 95,000 animals were being slaughtered each week, with the British army brought in to manage logistics.

The final case was confirmed in Cumbria on 30th Sept 2001, not before GBP375 million was spent on haulage and disposal, including GBP113 million on mass burial pits and GBP304 million on post-slaughter cleaning.

At the same time, there was a complete ban on the sale or movement of livestock, while after a brief foray into carcase disposal at rendering plants, all culled animals had to be burnt and buried on-farm. As well as the agricultural sector, like our own Covid-19 crisis, the tourism industry took a sharp hit with regional travel bans, along with the cancellation of major events such as the Royal Welsh Show and the British Rally Championship.

It was also a time of personal devastation for many farming families, with hardened farmers deciding they couldn’t carry on, as generations of pedigree livestock, usually each with a name, were taken from them because of blisters in the mouth and between hooves.

As we get to grips with our own Mycoplasma bovis incursion, we can only hope that our borders and regional defence structures are firmly in place and promptly implemented when required, given that experts suggest, “it’s not if we get FMD, but when”.

A key part of the fight against the disease centres around animal traceability, administered through the NAIT scheme, initially thought to be deficient by many critics in the rural sector, but gradually gaining better acceptance as the crisis evolved. Given that the 2001 UK FMD outbreak showed some weaknesses in traceability, during the 2019/20 season in NZ, animals registered prior to movement sat at 76% (up 24%), movements recorded within 48 hours was at 63% (up from 57%) and movements reported within 5 days sat at 73% (up from 66%).

Ospri committee member Robert Ervine welcomed the increasing levels of engagement with the system. He said, “given the lack of accuracy and engagement historically, most farmers, post M. bovis, appear to have a willingness to meet NAIT obligations. It’s encouraging to see 75% of all our farmers recording livestock movements within the recommended time frame, helping to manage the M. bovis response, but also putting us in a better space for managing any future livestock disease outbreaks.”

The chair of a new committee set up to review the handling of Mycoplasma bovis outbreak says it isn’t a witch-hunt.