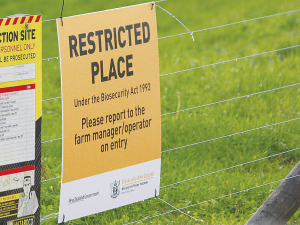 M. bovis response was the biggest ever response conducted in NZ and when it began it was clear that the various authorities were not as prepared as they thought they were, a review has found.

An independent review into the Mycoplasma bovis eradication strategy has found that the programme is still hindered by poor industry-wide compliance in the recording of animal movements.

The review team, headed by Professor Nicola Shadbolt, says despite the best efforts of all concerned there are still problems with sharing data between the Ministry for Primary Industries (MPI), farmers and supporting agencies and that this continues to frustrate the implementation of the programme. But Shadbolt says it's a remarkable achievement that NZ is currently on track to eradicate M. bovis.

The 196-page report canvasses processes and procedures that have taken place since the disease was first discovered in 2017 and charts the progress made since then. It makes a series of recommendations to improve this and other biosecurity incursions.

It notes the M. bovis response was the biggest ever response conducted in NZ and when it began it was clear that the various authorities were not as prepared as they thought they were. The report says MPI and the livestock sector were unprepared to tackle a large scale response because there were too few well trained and experienced staff. It adds that there were issues around training and consistency of decision making, particularly around movement control and dealing with compensation claims.

Not surprisingly the report takes a close look at NAIT saying that it was widely known before 2017, when M. bovis was detected, that the system had significant challenges and that compliance was low. It suggests that the present situation in regards to NAIT compliance still leaves a lot to be desired.

The advisory panel says it is "convinced that the biosecurity system must be strengthened by a planned programme of improving animal tracking and compliance and the accurate recording of farm data".

The other issue to come under the spotlight in the report is that of communication. It notes that early participants (likely farmers) found engaging with the M. bovis programme deeply frustrating, partly because many MPI field staff were inexperienced and decison making was cumbersome and inflexible. Also a cautious interpretation of the Privacy Act prevented information sharing. The report syas there need to be bettwe appreciation of the importance of good communications.

A key recommendation of the review panel is to develop a governance structure for dealing with livestock diseases which would be made up of representatives of MPI and industry organisations, with an independent chair. Its role would be to report to the Minister of Biosecurity and to effectively develop and monitor progress on a plan to deal with biosecurity diseases relating to livestock.

The review panel highlights the need to have a core group of skilled professionals, trained and experienced in biosecurity responses, including epidemiology, diagnostics and leaderships. It also wants a 'reserve' of trained skilled people who can be mobilised to help deal with a similar event in the future, and stresses that it's critical these people have technical knowledge of farming systems.

Other recommendations from the panel point to the need for MPI to develop and resource a livestock preparedness function, leveraging off the decision for them to establish the new position of chief veterinary officer (CVO) - a position that incidentally existed in the old MAF days.

The panel sees this person having the responsibility to connect with MPI vets and vets in private practice. It wants a much stronger 'team' approach to be established with people working outside MPI.

A major recommendation is to develop a national contingency plan to deal with animal diseases, supported by a full suite of operating procedures including manuals and templates. It also wants a resource data strategy for the livestock biosecurity system.

While the report contains many criticisms of how the M. bovis programme was handled, it does acknowledge improvements have been made since the start of the outbreak. It says in many respects the programme has evolved to being an "exemplar of good practice" and says it's important that the hard-won lessons of the past are not lost.

The review chair Professor Nicola Shadbolt says the panel acknowledges the significant impact the eradication has had on farmers and rural communities, as well as those working on the programme.

She says a large number of people, including farmers, worked incredibly hard to get to where we are now and has put us on track to be the first country in the world to eradicate M. bovis.

"We now need to make sure we capture these lessons learned, improve our preparedness for the next animal health response, have a world class biosecurity system that all players commit to and will deliver," she says.

MPI director-general Ray Smith says the M. bovis programme has provided valuable lessons for future disease responses, including the foot and mouth disease readiness programme. He says changes have already been made across the biosecurity system but the review panel's recommendations will help MPI in the future.

"A number of improvements have already been made or are under way and these include the appointment of a new specialist welfare advisor within Biosecurity NZ to ensure a greater focus on the needs of people affected by future incursion responses. One of the key recommendations is that we all need to work more closely together to ensure the right capability and support is in place for people affected by a disease incursion," he says.

DairyNZ chair Jim van der Poel says the biosecurity response and management of M. bovis has been challenging, especially for our farmers directly affected. He says the review will help ensure that government and industry are better prepared for any future incursion.

"It's vital we get it right for farmers.

"Establishing a cross government and industry working group, coupled with ongoing biosecurity and farm management practices, will help strengthen the work we do," he says.