NAIT’s a ‘pain in the arse’ 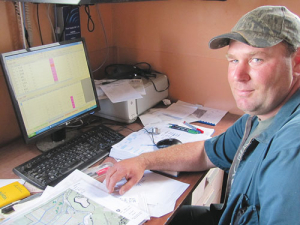 He says some of these problems relate to the interface between NAIT, Ospri and MPI and says this needs to be improved and changes made.

Criticism of NAIT is rife in the light of the M. bovis outbreak, chiefly that it is not user friendly and hard for farmers to use. And there is the issue of many farmers not having access to fast broadband.

Hoggard says the NAIT system is “clunky” compared with all the other IT systems he uses on his farm.

“It’s non-intuitive and one can get lost in the system real easy,” he told Rural News.

“We came back from Australia recently and my wife opened up NAIT to transfer some calves we were about to sell. Then suddenly she found some sort of changes to the system and she was asking ‘what the hell is this and that?’ ” Hoggard says.

“It took her a while to work out what had happened. Before we left everything was fine.

Hoggard also complains that NAIT doesn’t interface with his own system of recording data about his cows and farm. NAIT forces dairy farmers to painstakingly re-enter data from their own recording system into the NAIT database.

“I can tell you everything under the sun you want to know about my cows, and this is available, but there is no simple way for me to press a button and transfer that over to NAIT. I have to do that separately and individually and it’s a pain in arse.”

He says while the spotlight is on M. bovis for good reason, other diseases need to be monitored equally closely, one of which is theileria.

Hoggard believes NZ needs a system that also tracks this disease because of the harmful effects it can have.

“For example, farmers in Northland bought calves in Waikato on the assumption that having been in Waikato they’d have been exposed to theileria and they’d be able to cope with it.

“But when they showed up some started dropping dead with theileria, and it turned out the calves had only been in Waikato for one week and had come up from Southland so they had no immunity to the disease.”

Hoggard believes that when a farmer buys animals he should have the right to know where that animal has been and that all farms need to have some sort of biosecurity rating. He says a farmer with pretty much a closed herd would be seen as a low biosecurity risk, whereas a farmer who regularly trades stock would have a higher rating.

While this may raise all sorts of privacy issues, these should be waived to ensure a much safer farming system.