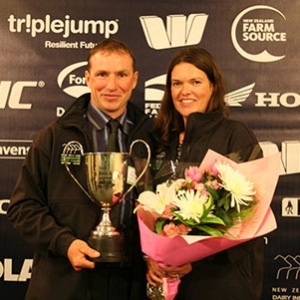 Kelvin and Heather McKay say it was a natural progression for them to take out the 2015 West Coast/Top of the South Sharemilker/Equity Farmer of the Year title.

The Greymouth couple, who placed second last year and third in 2013, took home $7100 in prizes at Monday night's award ceremony in Shantytown. The other big winners were Thomas and Hannah Oats, the region's 2015 Farm Managers of the Year, and Danny Mitchell, the 2015 Dairy Trainee of the Year.

"Entering the competition made us look closely at all aspects of our business," says McKay.

"It has made us focus more on what it is we want to achieve and identify areas of our farming operation which we can improve."

The couple have been equity farm managers milking 185 cows for New River Farming at Camerons, near Greymouth, for nearly three years. Their goal is to buy out the farm's partners to gain full ownership within 10 years.

Kelvin, aged 40 years, has been in the industry since becoming a farm cadet on leaving school, while Heather, 36, holds a Bachelor of Arts and a Master of Parks, Recreation and Tourist Management and works off-farm, although she is involved in the financial and planning aspects of the business.

They say they complement each other and are hard working and determined. "Where we have set goals we work together to strive towards them. We like to challenge ourselves and seek continual improvement."

The 2015 West Coast/Top of the South Farm Managers of the Year, Thomas and Hannah Oats, love what they do and work well together.

The young couple – they are aged 22 and 20 years – are currently contract milking 350 cows for Thomas' parents, Richard and Wendy Oats, at Reefton. They won $5000 in prizes.

It was the second time they had entered the awards. "Entering the competition has made us look at our farming system and see where we could improve."

The couple aim to progress to 50% sharemilking within two years and have the ultimate aim of farm ownership.

The 2015 West Coast/Top of the South Dairy Trainee of the Year, Danny Mitchell, has achieved his short-term goal by winning the title and collecting $4550 in prizes.

Mitchell's next goal is to progress to a manager's position while longer-term goals are to go contract milking and sharemilking.

He is currently a farm assistant for Richard and Simon Tripe, milking 400 cows once a day all year round at Koromiko, near Blenheim.

The 24-year-old tried his hand in the timber and meat industries before switching to farming.

"It was during an off-season period, when I was working as a freezer hand, that I tried farming and I never returned to the works after I discovered my love for farming," he says.

While studying through Primary ITO, Mitchell was encouraged by his co-ordinator to enter the competition.

Further details on the winners and field days are at www.dairyindustryawards.co.nz.

The Government is giving an extra $400,000 to help West Coasters recover from the devastating March floods.

Pay cut worth every cent

DANNEVIRKE SHAREMILKERS Mark and Jaime Arnold were named the 2016 New Zealand Share Farmers of the Year. They took home $52,000 in cash and prizes at last night's national awards in Wellington.