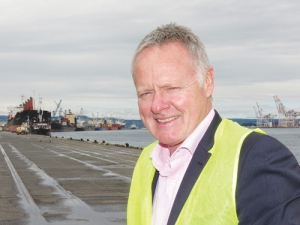 Dairy farmers stand to benefit financially from the expansion at the Port of Tauranga, says chief executive Mark Cairns.

The company is now dredging so that by mid 2016 'super container' ships of the Maersk Line will be able to berth at Tauranga -- the only NZ port handling these ships. Otago is also dredging to take larger ships.

Cairns told Dairy News the bigger ships will create efficiencies, saving money on shipping which is now the biggest cost in the supply chain.

At present the outer channel to the port is being dredged to 17.4m deep and the inner harbor to 16m to accommodate the bigger ships. Tauranga will then become a hub for cargos from other NZ ports coming there to be transshipped overseas.

Cairns says a Shipping Council report recommended Tauranga as the North Island hub port and pointed out that such a move would save NZ$338 million a year.

He says the idea of a large hub port is similar to the concept in the NZ aviation sector where just two major international airports can land very large aircraft. This doesn't squeeze out smaller airports or ports, but in certain areas it creates attractive financial outcomes.

The game breaker for the expansion project at Tauranga, says Cairns, was a deal struck between Kotahi – representing Fonterra and Silver Fern Farms -- and Maersk for a guaranteed output of cargo from the port for ten years. This deal led to the Port of Tauranga expansion because of guaranteed cargo through the port.

"This deal with Kotahi means we will be handling 95% of the dairy exports in the North Island through Tauranga whereas in the past they were going out through different ports serviced by smaller vessels more expensive in ocean freight costs.

"It will be good for the farmers: they will face a much lower supply chain cost to get their goods to market. NZ has the challenge of the tyranny of distance so cutting freight costs is critical. I take my hat off to Kotahi because they have shown real leadership in doing a 10 year deal with the Maersk line."

Fonterra, Tatua and Miraka export their products through Tauranga and Open Country Dairy puts some of its products through the port. Like the dairy industry itself, the Port of Tauranga has to be cognisant of the volatility in the market and the production trends onfarm.

"Market volatility in the dairy industry affects us as it does forestry and we have to read the commodity cycles, [seeing] what the long term trends are in any commodity cycle and of course milk production," Cairns says.

"While it's predicted that overall milk production will be down this season, the actually tonnage of dairy products being exported through Tauranga will be up as these are transhipped through here."

The Port of Tauranga has a reputation for being highly competitive, expanding its influence beyond Bay of Plenty. It has a 50% share in the Port of Timaru and Northport, Whangarei, and other investments.

It has the advantage of having the space to expand – 190ha, of which only 40% is now used. This contrasts sharply with Auckland which is struggling for space and hampered by the city's road traffic congestion.

Also, Tauranga is closer to all main North Island farming areas and has exploited this advantage.

Cairns says they have a constant future focus and a multi-layered strategic approach.

"We also work with the shippers on what markets they need to get their goods to and with the shipping lines to access the European or Asian or Trans-Tasman markets, and the type of vessels calling."

Dairy industry remains a key driver of the expansion of the Port of Tauranga, as does the meat industry and the booming kiwifruit industry.