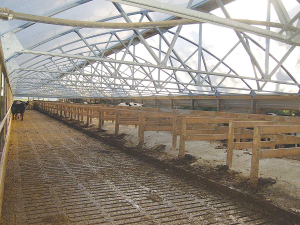 With the Government facing calls to slash cow numbers as part of its climate change action plan, Pow, the founder of HerdHomes, says a knee-jerk reaction to reduce cow numbers would be naïve.

He suggests looking at other options including reducing the number of hours cows spend in paddocks.

He suggests standing cows somewhere where the effluent is contained, like the HerdHome shelters he makes.

“This means it becomes not a risk to the environment or a waste problem but it becomes your fertiliser, readily available on your farm,” says Pow.

“If the manure is re-applied at the end of winter before the manure temperature reaches 10 degrees C, then there is effectively no waste of the nitrogen or sulphur that it naturally contained in the effluent.

“Natural soil bacteria start to break down manure at this temperature, which is created by nature to coincide with natural spring growth. This way it is not able or likely to penetrate the soil and become a ground water risk.

“Cow manure is easier to handle in dry or semi dry form than flushing it away with loads of water.

“There are a few dos and don’ts: don’t hold cows on tracks or pads or allow cows to make camp spots in the paddock; always remember solid manure is great, liquid form is more likely to escape the plant root zone.”

Another option to reduce GHG on farms is to stop farm wastage, he says.

“Wastage can [occur] in so many ways. Just look at the difference in so many farms’ stocking rates and production per hectare. Look at the true potential of your land and region to produce milk or beef. Under-production on valuable land is wasteful at a time that the world’s population is expanding.”

He says he has some concerns around the push by lobby groups to target dairy farming.

“If we as famers move and change too many things at the start of this period, does this mean that they expect us to climb an even bigger mountain before the end?”