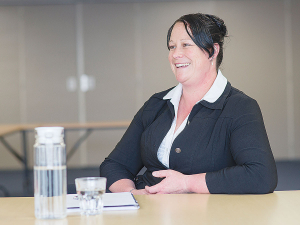 “Some industry partners like Dairy Womens Network (DWN) have had a lot to do with that and the industry itself has started to understand what inspiring leadership means,” Keoghan told Dairy News.

The industry has encouraged and campaigned for women to take up new opportunities and positions, she says. They have always had many wonderful skills but haven’t necessarily put themselves forward.

“It has been fantastic to see. The last three or four years they have stepped forward massively.”

Keoghan was 2016 Fonterra Dairy Woman of the Year – a DWN award – and was named Rural Woman of Influence in October last year.

“The Women of Influence Awards is one of those things that helps -- sharing stories about people able to step outside their comfort zone and inspire other people to do the same.”

There has also been a focus on the health and safety arena in the industry and making people aware that leadership is the key. “And often we find in the rural communities and agricultural businesses the females are more focussed on that.”

But the whole industry has stepped forward in leadership, not just on the female side, she says. Rural people are being encouraged to share skills within their region and outside the industry. “Taking that step forward… it  is a real leadership journey that the industry has been on.”

Nominations opened in late May for this year’s Woman of Influence Awards. She encourages anyone nominated to “go for it”.

“You don’t do it for recognition. You do it because you would like to see success in others.”  You inspire others, she says.

She has enjoyed that side to the award and the opportunity to speak around New Zealand.

And it has helped her own career progression -- an unexpected outcome. “Raising the profile of your own involvement by inspiring other people also helps when you are looking for new governance opportunities.”

Keoghan says she resigned earlier this as general manager of the Pamu Academy to focus on governance. Trying to do both was becoming too difficult.

“I had to stop and think where my actual focus was to be. My long term focus has already been looking to governance only – earning value, risk management and health and safety, leadership and culture as my specialities.”

She quit the Pamu executive role and became a director for Invercargill City Forests.

She was already a Western Milk Products director, in her own business and managing a local dance studio.

On June 3 she was appointed deputy chair of Fire and Emergency NZ, a ministerial appointment.

Keoghan said she was able to focus on what she wanted because of the backing and motivation from some colleagues in the Women of Influence Awards and her other networks.

Nominations for the Women of Influence Awards are open until July 15.

A gala awards dinner on October 24 will be preceded by a new Speaker Series of five events held NZ-wide in August.

World renowned fashion designer Karen Walker will headline the Auckland event. Other venues will be Tauranga, Wellington, Nelson and Christchurch.

“The theme of this year’s series is ‘From Grassroots to Global’, on the stories and ideas of women making their mark nationally and internationally and in their own communities and regions,” McLean says.

“From the farm gate to the fashion houses of Europe, each of us knows women who have inspired us by their words and deeds. These awards are a chance to give them the recognition and accolades they deserve.”

The 10 awards categories include arts and culture, board and management, business enterprise, community/not for profit, diversity, global, innovation and science, public policy, rural and young leader.

Pamela Storey has announced that she will be ending her term on the Dairy Women’s Network (DWN) Trust board this month.