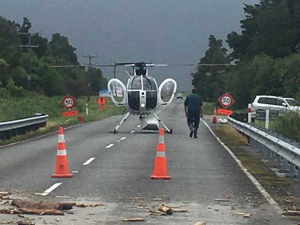 An LIC helicopter ready to deliver semen straws and consumables for AB technicians.

To help ensure a smooth spring mating period for farmers, a Cessna plane was used by LIC to deliver around 3,300 straws of semen between Timaru and Ashburton.

An additional 500 semen straws have been delivered via helicopter to affected farms on the West Coast. This helicopter delivery also included consumables needed by AB technicians to be able to do their jobs.

In a few cases, LIC’s AB technicians have been able to access cut-off farms via tractor.

Around three out of four dairy cows mated to AB in New Zealand are from LIC’s bull semen.

“The dairy cow cycle takes roughly between 18-24 days. If insemination doesn’t occur at the right time during that cycle, it means a three week wait until the cow is in heat again. This three week loss can have a number of negative flow-on effects for farmers, including the potential loss of three weeks’ worth of milk supply and an impact on calving periods the following year.”

“This is why LIC is working hard to ensure semen delivery is not impacted by the adverse weather conditions.”

The co-op’s 840 national artificial breeding technicians, supported by an additional 300 support staff, inseminate up to 100,000 cows each day during peak mating season. This equates to around 4.6 million inseminations performed by LIC each spring. Close to half of LIC’S AB technicians are farmers in their own right.

Colin Corney, LIC’s National Artificial Breeding Field Operations Manager, says affected farmers are doing an amazing job at looking out for each other and that there is a great support network.

“We are pleased to see farmers helping each other get through the wild weather. LIC will continue to deliver to flood-affected farms, unless it is too dangerous to do so.”