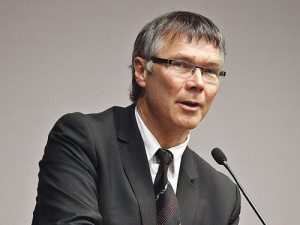 If elected, Labour’s charge on water for irrigation will be a “small royalty” for all “substantial takes”, says spokesman for water and the environment David Parker.

“Bottled water is a higher value use of a more pristine form of water that would attract a higher royalty than irrigation water,” Parker told Dairy News at the Environmental Defence Society ‘Tipping Points’ conference in Auckland last week.

“But nevertheless irrigation water in our view should incur a small royalty and the money would go back to the regional councils.” That is for all “substantial takes” of irrigation water. “We are not worried about the little lifestyle farmers.”

Dairy farms using large quantities of water for irrigation would face a small royalty, he says.

While the royalty would be in the cents/litre for bottled water, it would be cents/cubic metre (1000L) for irrigation water. “You’ve got to leave the profit in it for farmers.”

Labour leader Jacinda Ardern had earlier told the conference that Labour’s policy is to set a royalty based on three principles.

“That is why I am not going to provide specific royalty rates here today. I can say the price will be different for premium aquifer water often bottled for export versus irrigation water, for example, for which the price will be based on cubic metres instead of litres.

“In both cases we will make sure there is always a good profit margin for the user and in all cases we will provide certainty about long term prices that is needed to encourage investment.”

The royalty will go to the provinces, she says.

“We will resolve the Maori claim recognised by the Waitangi Tribunal. The balance of the royalty will go back to regional councils who can use it to improve waterways or reduce rates and to assist with fencing and riparian planting.”

She wants to talk to those affected.

In her first 100 days she will host a round table at Parliament on water.

“I will invite all the affected sectors – agriculture, horticulture, exporters and environmental groups.”

Ardern says farming is in her family: her grandparents were dairy farmers along the Waihou River.

“Farming has played a role in the decline of our waterways but the path forward lies not in blame but in a collective commitment to do things differently.

“NZ has always had a reputation as an agricultural innovator. Where there were challenges NZ’s farmers had ingenious solutions. This is just another challenge.