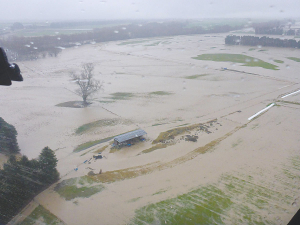 The feedback from Fonterra suppliers was that the flooding brought a "really tough" situation for some but others were surprised their farms fared as well as they did, he said.

Worst affected were farms along the Ashburton River.

"We had some challenges earlier on farms on North Canterbury as well, so we had farmers evacuated out of their houses up on Sunday night.

"There were a number of farms out there who we asked to dispose of milk. One of the reasons is that we just weren't happy sending tankers out in those conditions with uncertainty over roads and also the state of the tanker tracks."

Fonterra also had to briefly evacuate the Clandeboye factory when a local creek burst its banks.

Fergusson said a lot of farmers would have wanted to push the season further but they dried off early to beat the weather.

However, Fonterra had a couple of hundred suppliers still milking as well as 60 to 100 true winter milkers.

"I think we our transport team do an incredible job as long as they've got a route to factory so we are working quite closely with the authorities regarding roading to see if we are able to get around."