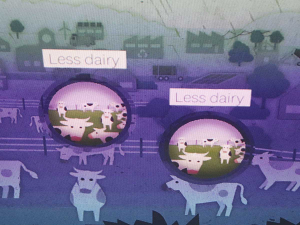 The interactive display at the exhibition where users can touch 'less dairy' to improve water quality.

The museum is currently running an exhibition showing water quality in various parts of the country: farm streams, lakes and harbours.

Bottles are artificially coloured to show what they believe is colour of water in those places. It also has an interactive display where people can supposedly improve the environment by touching a screen which says less cows.

Te Papa says the Te Taiao Nature exhibition, which includes the controversial dairy element, is designed to take a broad look at NZ’s environment, the threats it faces, and what can be done to protect it.

Spokesperson Kate Camp told Dairy News farming is one of a wide range of human activities that is looked at.

She says the exhibition content is based on various science and research papers including a report on NZs freshwaters values, state, trends and human impact, by Sir Peter Gluckman, a former Chief Science Advisor in the Prime Minister’s office.

She says they also used the Royal Society’s 2016 reports on climate change implications and the transition to a low-carbon economy.

But she says they didn’t consult any groups or individuals.

Camp says Te Papa’s challenge is to take a complex and varied picture, and present it in a simple, easy-to-understand way, that is still true to the overall picture.

“We can’t be an encyclopaedia that presents the full complexity of an issue, but we can spark interest and get people thinking and talking.

“We hope that our visitors will seek out more information, and that they’ll make changes in their own lives to help protect the environment. Te Papa is a place for New Zealanders to have important and sometimes difficult conversations – that’s something we don’t shy away from,” she says.

Camp says there is very clear evidence that farming has an impact on our waterways, along with other activities, and that’s what the exhibition shows. But she says they acknowledge that there are many farmers and organisations who are caring for our waterways, and appreciate the work our rural communities are doing.

“We have made changes to the display based on the feedback we’ve received. We had never suggested that these are samples of actual water and have added a note to the display to make it clear that these bottles are not samples but are only symbolic,” she says.

Camp says they have changed the image on the farm stream bottle to remove any misconception that it showed a cow pooing in a stream.

“It now shows a cow standing on a solid background, with wavy lines nearby which symbolises that farm run-off is reaching many waterways, without giving the impression that cows are pooing directly into streams,” she says.

Camp says Te Papa will make another addition into the exhibition later this year which will be video content of people taking action for the environment, including rural community groups and farmers.