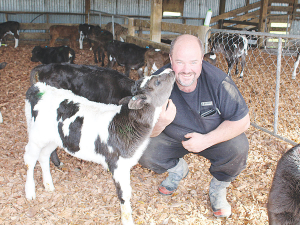 He was born in Southland and has been dairy farming for 25 years so knows the vagaries of the conditions in his province.

He farms at Mossburn and says although the property he is on is partly irrigated, he's had to source supplementary feed from Otago. He says he'll get through the drought.

"But what I'm seeing is a whole lot of sharemilkers, especially young ones, who are struggling a fair bit because of their lack of knowledge about droughts, because they have never been through one before," Herrick told Dairy News.

"It's a learning curve for them and, as I see it, farm owners and experienced consultants need to be guiding those guys through these difficult times. I am hearing some decisions being made which could be detrimental to them managing the winter as they are feeding out their spring feed.

"Some have been diving into that spring feed in the hope that the weather will come good and it hasn't and this is a very risky option," he says.

Herrick says he believes there will be a feed shortage come spring. At present there is only grain and PKE readily available with all pasture based supplements having to be trucked in from Canterbury and other parts of the South Island.

"My advice is to buy feed now because the cost is going go up by spring time. I know that the cost is horrendous at the moment but it's only going to get worse as it's a supply and demand thing.

"In my experience is always better buy your feed early to protect your winter and spring otherwise you get into a situation where you need the feed but have to pay double the price for it and that really hurts," he says.

Herrick says the winter will put pressure on many herds. From his observations there are cows in the province that are in good condition but there are a lot that are looking pretty average. He says some farmers have handled the situation well by making early management decisions, but there is still a problem getting cull cows into the processing plants because of staff shortages there, in part caused by Covid.

He says he's hearing of people drying cows off now, which unless they can get them to the works quickly, is not going to help the cause much because they still have to feed them.

"Personally we did get rid of as many culls early on that we are not going to get any benefit from and then we milked the rest feeding them well. But I am not going to do this if it affects cow condition or has an impact on next season," he says.

Herrick says farmers need to meet drying off targets and there is a risk of extending production too long for very little real gain.