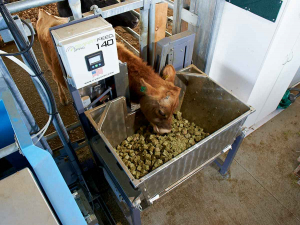 A bull involved in the trial.

The trial in Waikato involving dairy breeding bulls is believed to be a world-first and is being run by Livestock Improvement Corporation (LIC) and CRV Ambreed.

Stage one of the trial involves measuring the amount of methane that a small number of bulls produce with specialised equipment imported from North America.

Once the systems have been fully tested, a full trial will get underway in February 2021 to identify individual bulls that produce less methane and potentially breed a lower methane emitting cow.

“Research in other ruminating animals such as sheep has identified genetic variation for methane production so we’re undertaking research to see if there are similar results in New Zealand dairy cattle,” says chief scientist at LIC, Richard Spelman.

“If we’re successful and establish that the variability of methane emissions between New Zealand dairy bulls can be linked back to their genetics, the opportunity is to utilise this variability to breed cows from lower methane-emitting bulls. This type of science doesn’t happen overnight but we have real potential to help farmers meet the 2050 methane target under the Climate Change Response Act.”

As part of the first stage of the trial, the daily feed intake and methane output of 12 young bulls are being closely monitored at LIC’s Chudleigh Farm with another seven being assessed under similar conditions by CRV.

LIC’s bulls are being housed in a purpose-built barn and fed Lucerne hay cubes imported from Australia in feed bins that measure how much each bull eats. The bulls visit a Greenfeed – a special methane measuring device – and are enticed to do so by a small feed of pellets to keep them in the machine for three to five minutes. Methane is measured each time the bulls visit the Greenfeed machine giving around three readings per animal per day.

The welfare of the bulls taking part in the trial is being monitored by LIC, with oversight from the Ruakura Ethics Committee which has approved the project. The bulls will be able to move around in their pens; eat, drink and sleep when they wish.

Data captured during the trial will be shared between LIC and CRV as well as the Al Rae Centre at Massey University, which will undertake independent analysis of the findings.

If the trial is successful, the same method will be used on around 300 bulls in a full trial scheduled for February.

“By 2023 we also hope to validate the methane measurements we captured in young bulls during the initial trial stages were representative of the methane output in lactating cows,” says Spelman.

“This work has the potential to deliver real benefits to farmers in the future by providing another tool to reduce their farm emissions and consequently improve agriculture’s environmental footprint by enabling farmers to utilise these results in their breeding decisions.”

Bull semen flying out of the door

Balanced approach to breeding paying off

The motivation of dairy farmers to create herds that are more efficient converters of feed-to-profit is long-held, but a balanced approach to breeding is paramount for optimal on-farm success.