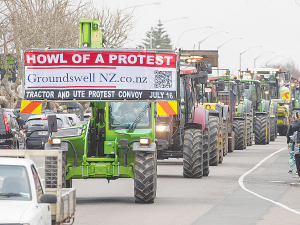 He says boycotting a meeting with the Prime Minister because of issues with levy-paying bodies isn't the right thing to do.

"We don't get an audience with the PM every day," he told Dairy News.

"I think it's better to attend the meeting and take the opportunity to air your grievances."

Ardern had also invited Groundswell, an organisation set up to organise national protests over regulations targeting the rural sector. But Groundswell refused to attend, saying it expected a one-on-one meeting with the PM.

Hoggard says the meeting ended up as a gathering of heads of industry bodies making up the He Waka Eke Noa primary sector climate action partnership.

Groundswell NZ co-founder Bryce McKenzie says it wants to meet Ardern and discuss "the impact of unworkable government policies on farmers and growers in New Zealand".

"Groundswell NZ requested a meeting with the Prime Minister to discuss these unworkable policies, the Groundswell NZ alternatives, and the failure of representation of farmers and growers by the established industry bodies.

"The Prime Minister offered to let us sit in on her meeting with the very establishment organisations that have failed to represent farmers' concerns, ensuring they would be present to shield the PM from our criticisms of them and the Government."

McKenzie says their request for a meeting without the "failing establishment bodies" was declined.

"Groundswell NZ is now publicly repeating its request to meet with the Prime Minister, without the Government's pet lobby groups. We'll meet anywhere, anytime, but not for a pantomime pretending to represent grassroots farmers."

He also claimed that Groundswell was NZ's largest organisation in terms of subscried grassroots farmers, growers, and supporters.

"The Prime Minister should meet with us for a discussion - not pigeonhole us with the establishment industry body lobbyists," he says.

Hoggard says the Feds are not getting into a contest with anyone on membership numbers.

"I mean, the number of likes you get on a Facebook posting doesn't mean you have so many members."

Hoggard says Federated Farmers' executive, including himself, are coming up for re-election later this year.

"If people want to stand, then go for your life and put your name up," he says.

"The same goes for levy-paying bodies. They hold director elections every year and there's nothing stopping anyone from standing.

"The only problem is that these director elections garner very little interest - only 20% of eligible voters take part," Hoggard says.