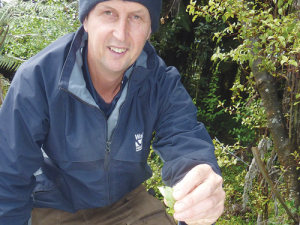 The beetles have been specially bred by Landcare Research to tackle tradescantia – aka ‘wandering willie’ – in the William Hall Arboretum and Walk at Thames.

“We’ve released three different types of beetle, each one attacking different parts of the plant – the leaf, stem and tip,” says Lockhart.

“These beetles have a big job, because tradescantia is thick in the arboretum.”

“What’s exciting is that I was able to harvest about 100 leaf beetles from a site in Hahei where they’ve been doing great work in recent years to combat the tradescantia problem there,” he says.

Tradescantia smothers the ground, preventing native tree regeneration. The plant is also a nuisance for home gardeners and causes allergic responses in dogs. It is so widespread in NZ that manual or chemical control on a large scale is not feasible.

“That’s where biological control comes in,” says Lockhart. “It uses a living organism to control another, very successful in NZ since the 1920s to safely control different weeds.”

The tradescantia beetles are expected to support pest plant control work now done by TCDC, Forest & Bird and community groups in the arboretum.

Ken Clark, from Forest & Bird in Thames, and his weekly working bee group work on the weeds in the arboretum.

At Hahei, where the beetles are well established and working together, tradescantia is knocked back and karaka seedlings are growing.

“The beetles have had time to get established at Hahei and it’s awesome to see some good results. We’re hoping to see the same here at the arboretum,” says Lockhart.

The tradescantia beetles have been approved since 2011.