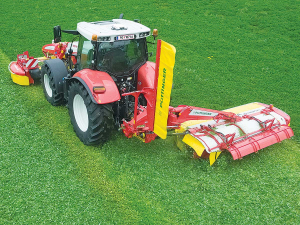 Pottinger is launching a 3.0 m version of its cross-flow auger.

Already available on Pottinger’s NOVACAT A10 mower combinations and the 3.5m NOVACAT 352, rear mower, the Austrian grassland specialists are launching a 3.0 m version of its cross-flow auger - the NOVACAT 302 Cross Flow.

Offering the ability to merge swaths after mowing, without the need for a conditioning element, the 3.0m version only requires a tractor of 100hp, while also offering the convenience of a hydraulically controlled rear discharge flap, operated from the tractor seat.

In operation, the CF auger merges forage to form one swath right after mowing, incorporating a closed design to prevent leaf loss in delicate crops. The design ensures there is no ground contact and consequently no forage contamination, while operational efficiency is improved by the fact that no post-mowing swathing passes are required, before pick-up by a baler, loader wagon or harvester.

Said to offer versatile operation, the CF auger also creates a light conditioning effect as it turns the crop as it flows through the conveying auger. When mowing paddock boundaries, the auger can transport the crop away from the hedge-line with the rear flap closed, meaning subsequent passes with tedders keeps crop well away from the boundary.

For those seeking a more intensive drying effect, the rear flap can be opened to place a wider and airier blanket of forage.

However, the two swaths are deposited within 6 metres of each other, that in turn allows a twin rotor centre-swath rake to bring the material into one large row.

Keeping it short and sharp

When harvesting grass silage, farmers and contractors strive to get the highest possible forage quality to increase profits.