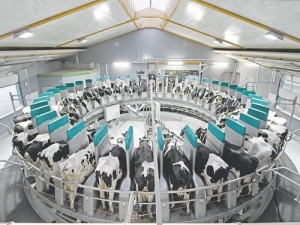 GEA says its Dairy Pro Q is a game changer.

Launched recently by GEA Technology at Teichroda, south-east Germany, the Dairy Pro Q is described by GEA spokesman Steve Pretz “as a game changer”. Four prototypes are running in Germany and two in Canada.

Says Pretz, “With customers seeking efficiency and profitability, bringing young people into agriculture needed a change in mindset from ‘live to work’ to ‘work to live’ and needed to be attractive and exciting; we believe automation is the key.”

The new unit has 40 stalls each with a robotic arm. Cows are brought into the collecting yard, and enter the rotary platform in the normal manner before the technology takes over.

Teats are cleaned and dried, fore-milk stripped and are post dipped within the liner.

One employee is responsible for overseeing the robot and attaching any liners that need to be fitted manually. The system currently milks 400 Holsteins in around two hours.

The platform is running on the Blottner family farm (1740ha) which also stocks pigs, beef, fowl and deer. They sought less dependence on labour, consistency of milking and improved efficiency by increasing production.

The system has already shown tangible benefits: production is up on average from 8kg/cow/day to 33kg; high yielders are topping 42kg. And somatic cell counts are down from 260,000 to 90,000, partly attributed to the cows being housed in a new building.

From a service perspective, the system allows individual stalls to be closed off if any faults are found, the milking continuing in the remaining stalls and the offending unit quickly removed for repair off-site.

Units are available from 20 to 80 stalls, and with capacities of 120 to 400 cows per hour, so there should be a system to suit most enterprises, GEA says.

Each robotic arm is much cheaper than a single stall robotic system.

China's domestic milk production has received a boost with the installation of the country’s largest milking rotary parlour.

GEA says its new iCR+ cluster removers are a game changer inside the milking shed.