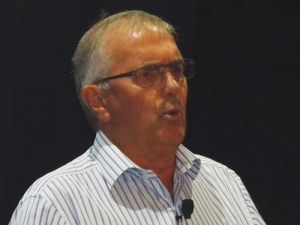 The MobileTECH conference at Rotorua was heralded as a showcase for emerging technologies and a forum to bring together designers, innovators and early adopters.

The key to the new technologies is the ability to be 'connected' to the outside world; but though history shows New Zealand is an avid embracer of new ideas – predictions are that 3.75 million Kiwis will have mobile internet connections by 2017 – the likelihood is that infrastructure development will not keep up with demand.

Craig Young, chief executive of the telecoms watchdog TUANZ, referred to surveys showing that 81% of people use the internet regularly and 80% buy online. But though 54% of typical NZ small-medium businesses have online presence, only 22% are set up to do business on their websites, and only 9% use social media to promote their products or services.

NZ needs better, more reliable broadband connections, said Young, noting that 13% of the population, and 23% of rural businesses, are still outside broadband connectivity, though they will benefit from the next stage of the Rural Broadband Initiative (a further $100 million is earmarked for Phase2 and $50 million is set aside to deal with known rural blackspots).

Part of the problem seems to be Kiwis' rapid uptake of new technologies and the way user habits are changing, said Young, referring to the 'Netflix effect' which brought its viewing over the internet to NZ in 2014: average data usage soared by 42% to current rates of around 96Mb per household per month.

Though connection speeds are rising, connectivity remains the leading disruptive problem for businesses today, he said. The arrival of 5G is likely to mitigate the problem, with speeds of up to 1Gbps, but it is not expected to launch until 2020, if worldwide standards are ratified in 2018.

There are concerns about the money available to introduce the technology, and an even greater problem is a skill shortage in the sector.

Only 1% of devices around the world with capability are connected, Walker said, but he sees a future in which the use of such devices will give real-time insights into typical farm performances. The information gleaned shows tangible benefits and allows users greater understanding of their businesses and helps them make informed decisions earlier.

Tony Walters, of Waiuku, near Auckland, is using the latest 4G connectivity to monitor soil moisture, temperature and rainfall information to make decisions on fertiliser application and crop growth.

One thing is for sure: those with a good memory will remember that the iPhone was introduced in 2007, just nine years ago, and we've come a long way. What might the next nine years bring – a fully 'connected' farm?

OPINION: We may now be into the third decade of the 21st century, but unfortunately much of NZ’s rural broadband and mobile coverage remains at third world levels.

Rural people should be getting the same level of connectivity in terms of broadband and mobile coverage as the people who live in urban areas.