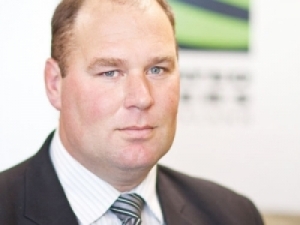 His comments were made on 'The Networked Farm' and 'What Farmers Really Want'.

Hoggard urged industry developers and retailers to engage with farmers before they developed products, so as to bring to market products that are relevant, not just an extension of the designers' wish-lists.

He mirrored previous speakers' opinions that farmers will buy 'whys', not 'whats', in respect of technology.

He also questioned the market research by higher tertiary educators and was disparaging about a driverless vehicle displayed by Massey University site at Central Districts Field Days. He saw it as "an over-expensive toy for dairy situations". Automated quads or UTVs -- already proven in farming -- could be more cost-effectively automated, he says.

Hoggard brought his farm up to speed with technology by his 'No 8' mentality and research, then bought gear via TradeMe, E-bay and Dick Smith. He has connected his dairy shed to his farm office via modems, routers and wi-fi and now looks at real-time statistics on yields, cell counts, rationing and drafting. But he still has to solve heat-detection, which is high on his wish-list.

Hoggard, a straight talker, has developed a farm manual which could be accessed online by all farm staff. It lays out policies, procedures and 'how to' stuff that minimise 'how-do-I-do-this' telephone calls. Contents include basics, e.g. how to set up the milking plant to start milking -- primary school stuff perhaps, but costly when they get it wrong.
Cameras connected by wi-fi give an overview of the farm, good for security and keeping an eye on workers, though some have worked out where to stand idle out of the cameras' arcs of vision, rather than finding something to do.

Hoggard plans to bring all his farm online (perhaps using solar power), will set up more wi-fi hotspots to cover greater distances, and expects to learn the art of computer coding to write his own software.

He challenged developers: "My internet enabled smartphone is my greatest tool; I can use it to open apps or use social media like Viber to communicate with my staff onfarm without the need for expensive radio telephone systems".

"I need to be able to do more with my phone and I don't need an expensive tablet to carry around with me. I need more useful apps to work on my phone, the holy grail being automatic measurement of pasture mass before and after grazing, for effective feed management -- no doubt done by a [driverless] vehicle."