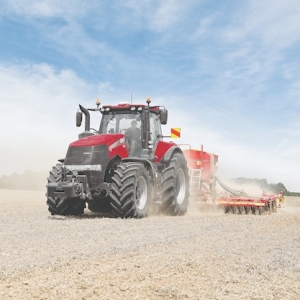 The world tractor market for 2014 is estimated to be about 2.1 million units, which showed a slight decline and high regional variation.

The big volume markets continue to be China and India where about 50% of the units sold worldwide are registered. Note that a great number of these tractors have very low horsepower, and indeed price, compared to the major players such as US, Brazil, Russia and the intensively farmed areas of Europe.

The EU, with its intensive farming, represents about 25% of global industry turnover at about Euro 8.2 billion. But the EU only has about 8% of global tractor sales, with an average tractor value of Euro 43,000 – double the world average

Individual markets show contrasting pictures. The Americas (USA, Canada and Brazil) delivered at least 235,000 tractors, about 50% being ‘lifestyle’ type units no bigger than 40hp. Though the global financial crisis becalmed sales in 2009-2011, a clear recovery has been seen in the last two years with sales in the US exceeding 100,000 units in 2014.The key indicator was a drop in 100hp+ tractors to 32,200 units (-34%).

In Canada, the overall market was flat – about 28,000 units and a cautious outlook for 2015 despite a bumper harvest but poor crop prices.

In Europe, 2014 showed an overall decline of about 8%. However, different EU countries showed very different results.

The Italian machinery associations report, “the lowest figure in the post-war mechanisation of Italy has been reached in 2014”, with 18,178 tractors sold (4% down on the previous year). Much of this downward trend
was in the high horsepower market which, compared with Germany still only represents 4% of the total.

The UK bucked the downward trend by staying flat at 13,500 units. Factories in Europe are predicting 2015 will see a continued downward trend of about 10%, caused by low commodity prices, adverse weather and the Ukraine-Russia conflict.

In Russia, a substantial market, sales fell about 6% to 37,500 units. Sales of mid-range tractors dropped sharply, but sales of sub-30hp tractors rose by nearly 40%.

In the powerhouse of Asia, Japan sales dropped by 15% to just 21,000 units. However China held its own – 524,000 sales of ‘real’ tractors to the professional farming sector. India says it remains the ‘world leader’ in tractor sales – 593,000 units, an impressive number but note it includes pedestrian tillers, single wheel units and many machines smaller than 30hp.

Fonterra milking it in China

Fonterra is enjoying solid returns from its China business as the country pushes the benefits of dairy during the Covid pandemic.