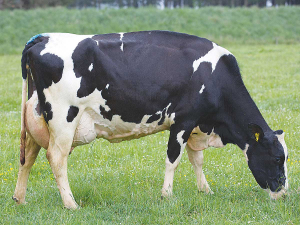 The Discovery Project, a joint initiative between Holstein Friesian New Zealand (HFNZ) and LIC has delivered a total of 61 sires into LIC’s sire proving programme since 2013. Five of these sires have then gone on to graduate into LIC’s Premier Sires teams and been marketed.

Running since 2013, the project uses genomic testing to screen and select 300 of New Zealand’s best Holstein Friesian heifers every year.

Up to 50 heifers are then chosen to go on and provide eggs that are crossed with specially selected bulls.

Any resulting bull calves are then genetically screened for desired traits including the animal’s overall type, milk production potential and the animal’s potential for lowering environmental impacts including greenhouse gas emissions.

The aim is to continually improve the genetics of the national Holstein Friesian herd to produce cows that milk better and are better for the environment.

They bred Tronnoco MH Samba-ET S2F who has been selected into the LIC Premier Sires Forward Pack team this year, but Tony says the bull would never have existed if not for the programme, because the bull’s dam died as a two-year-old.

“Losing an animal is never something you want to happen but because of the programme we had the embryo and as a result we have Samba. That is also why there are not a lot of records for his dam,” says Tony.

Samba’s grand dam is creating her own legacy in his herd, however, having produced over 900kgMS three times and still milking in the herd at 10-years-old.

Without the programme those genetics would have been lost to the national herd.

Tony says the Discovery Project has proven itself to be the best way to use modern technologies to genomically test animals and generate animals with the traits the dairy industry needs as quickly as possible.

The other Holstein Friesian bull to make an LIC team was Meander MH Armour-ET S2F, who is named in LIC’s, Premier Sires Daughter Proven team.

Breeders Robert and Anne Marie Bruin, Otautau, Meander Holsteins, says they have been involved with the Discovery Project from the start because breeding top bulls also means they are breeding top cows and continually improving the genetics of their herd.

“They say success is 30 per cent genetics. If you can get the genetics right, you can make huge leaps forward.”

LIC livestock selection manager Simon Worth says he is really pleased with the quality of the 17 code bulls coming through (bulls that produced their first semen straws in 2017) and although it was early days with only one round of herd testing and TOP classification from their daughters, he says the two Holstein Friesian bulls were part of a group that were looking really good.